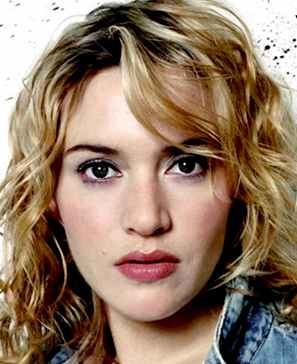 "Acting, and the privilege of being able to do it for a living, is so important to me. I don't turn up and just hope for the best. I really fret about it. I do my homework; I prepare myself for the experience of playing a particular character."
Advertisement:

Kate Elizabeth Winslet, CBE (born October 5, 1975 in Reading, England) is a British actor. Defined by her versatile and immaculate performances, she is considered as one of the finest actors to ever grace the screen.

Winslet is best known for being naked in almost every role she's done, her chameleon acting style, and being perpetually snubbed at the Oscars (until 2009 for The Reader). Amusingly, her Titanic (1997) co-star (and good friend) Leonardo DiCaprio similarly became famous for being perpetually snubbed at the Oscars until he won for The Revenant in 2016, leading some fans to jokingly suggest that Titanic was cursed.

She first appeared in Heavenly Creatures (directed by Peter Jackson), at age 17, which awarded her the British Actress of the Year. She then starred in the 1995 version of Sense and Sensibility. Her performance as Marianne Dashwood, the sister of Emma Thompson's Elinor Dashwood, brought her universal acclaim, with nominations for the Academy Award and Golden Globe, and wins in SAG, BAFTA and British Film Awards at the age of 19.

She performed in the period dramas Jude and Hamlet, winning a British Film Award for the former, and an Empire Award for Best British Actress for the latter.

In 1997, Winslet starred in the cultural-phenomenon Titanic (1997) launching her into mega-stardom overnight. She received her second Academy Award nomination at age 22 for her role as Rose DeWitt Bukater, as well as being nominated for practically every award possible.

In an effort to escape the insane pressure, Winslet made a conscious decision to act in independent movies that she loved and challenged her, including Holy Smoke!!, Quills and Iris; the latter scoring her another Oscar nomination.

In 2004, she played against type in the film Eternal Sunshine of the Spotless Mind. The deconstruction of the Manic Pixie Dream Girl trope in Clementine scored her 4th Oscar nomination.

In 2006, Winslet starred as Sarah Pierce in Little Children, a haunting portrayal of a dissatisfied wife. Her two roles in the 2008 films-The Reader and Revolutionary Road- awarded her two Golden Globes on the same night. Her portrayal as a German Nazi guard in The Reader awarded her the Oscar in 2009.

Demonstrating her great versatility, Winslet acted in English Rose type roles in Finding Neverland, The Holiday and A Little Chaos, dramas that relied primarily on her facial expressions (Labor Day, Wonder Wheel and Ammonite), villain roles (Divergent, Triple 9) a thriller (Contagion) and a comedy-drama (The Dressmaker), earning universal acclaim and a slew of awards, including an AACTA, Hollywood Film Award, TIFF Award and a Honorary César.

In 2012, for playing the title role in the period drama Mildred Pierce, Winslet won a Golden Globe, SAG award and an Emmy.

In 2016, she won a Golden Globe and BAFTA and scored nominations for the SAG award and her 7th Academy Award nomination for her portrayal of Joanna Hoffman in Steve Jobs.

In 2021, she starred and executive produced in the titular role of the phenomenon Mare of Easttown. She was awarded her second Emmy award for her performance.

She is almost an EGOT winner, after winning a Grammy Award in 2000 for Best Spoken Word Album.