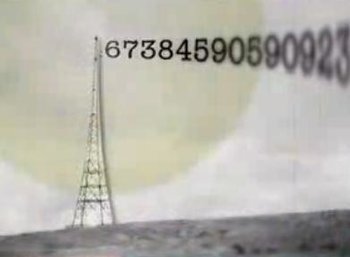 "What do they mean?!"
"It's said that they're hangovers from the Cold War; a way for various intelligence services to communicate with agents in the field. The truth... well, you're not actually cleared for what the truth is."
— Agent Johnson, Fugue State
Advertisement:

"Numbers stations" are real-life phenomena that arose in the Cold War era and are far too bizarre for fiction to pass up on.

Simply put, numbers stations are shortwave radio stations that broadcast long strings of numbers, usually read by a synthesized voice. It is generally assumed that the numbers are messages encoded using the one time pad

technique, sent by intelligence agencies to their agents in the field. No agency has acknowledged these transmissions, and decryption of a one-time-pad encoded message without the key is impossible. Mostly. The susceptibility of an OTP-encrypted message to statistical analysis varies inversely with the degree of entropy, i.e. randomness, in the keystream. Since this weakness is a well known and elementary trait of the OTP algorithm, and can be overcome through the use of a high-quality entropy source, there's no reason to expect that it will exist in the keystreams used to encrypt messages broadcast via numbers stations. Further, anybody foolish enough to use a one-time pad for more than one message is probably going to get their message decrypted, as the strength of the One-Time-Pad system almost completely hinges on it being used only once.

Aside from their use in Spy Fiction, many works of fiction will try to explain these broadcasts as part of some secret plan by a government or other sinister organization, and the Conspiracy Theorist or radio hobbyist will be obsessed with decoding them. Beyond that, they can be used for the creepy effect of having a static-y radio with a lone automated voice repeating gibberish endlessly. One popular theory has it that the creepiness is their entire purpose: plant one next to a country you don't like, and their paranoid government will waste a lot of time and money decrypting total nonsense.

The Other Wiki has an article describing numbers stations