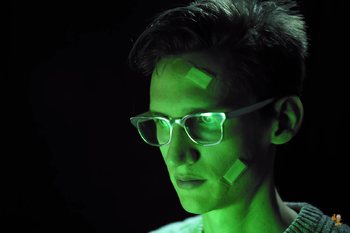 This is an Internet Person. You may either worship or fear him. The choice is yours.
Advertisement:

Neil Stephen Cicierega (pronounced siss-ə-REE-gə; born August 23, 1986) is an "online semi-celebrity" based in Boston, Massachusetts. His body of work is very varied and as a result it is somewhat hard to quantify. He has described himself at varying times and degrees of seriousity as a comedian, actor, filmmaker, musician, and animator, while The Other Wiki labels him an "Internet artist". It is probably safe to say that his creative output is quite diverse and spans across more than a few media.

Neil has basically been with the Internet since the idea of an "Internet Culture" was in its infancy and he himself was in his early teens, with some of his first publicly available creations dating back to 2000. He is possibly best known for being the creator of the Potter Puppet Pals series and the Animutation genre of Flash videos. He is also the one-man (with other members joining in live performances) band Lemon Demon, which you probably know for the song "The Ultimate Showdown of Ultimate Destiny". He also makes the occasional episode of New Kids on the Rock, an Affectionate Parody of early 90s Kid Coms and more recently a sketch series called Guaranteed* Video together with his regular collaborators, Ryan Murphy and Kevin James (not that one). The three of them, along with several other local colleagues, made the Wizard of Oz adaptation No Place Like Home. He has also forayed a bit into the realm of video game development, having released the Web Game Monster Breeder in 2018, as well as showing teaser for an Adventure Game he is also working on entitled Icon Architect 1.0.

In 2014, he gained some media buzz for two albums of mashups entitled Mouth Sounds and Mouth Silence, comprising many disoriented and epic mashups of popular songs (primarily from The '90s and Turn of the Millennium), mostly "All Star" by Smash Mouth. A third album, entitled Mouth Moods, came out in 2017, and a fourth album, Mouth Dreams, released in late 2020.

In short, he's effectively the king of "Oh shit, that was him?"

where he puts projects made with his long time friends Ryan Murphy and Kevin James. A semi-regular podcast, Guaranteed* Audio can be found on that channel, and wherever you listen to your podcasts.

It's Gonna Get Weird

The Gravity Falls finale was going to have the song 'It's Gonna Get Weird', created by Neil Cicierega, as a Villain Song for Bill Cipher. It was ultimately cut because they simply didn't have the time. (Animatic is by YouTube user Psychic)

It's Gonna Get Weird

The Gravity Falls finale was going to have the song 'It's Gonna Get Weird', created by Neil Cicierega, as a Villain Song for Bill Cipher. It was ultimately cut because they simply didn't have the time. (Animatic is by YouTube user Psychic)