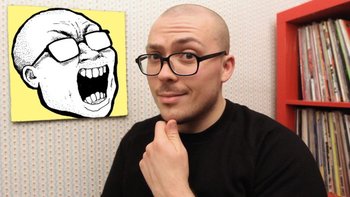 TV Tropes... forever.
"Hi, everyone. TVthony Tropestano here, the Internet's busiest music nerd, and it's time for a description of the TVTropes article, The Needle Drop."
Advertisement:

The Needle Drop is a web/radio-based review show hosted by music critic Anthony Fantano (self-described as "the Internet's busiest music nerd") that was started in 2007 (although video reviews didn't start until 2009).

The music Anthony reviews is within a range of "rock, pop, electronic, metal, hip hop and experimental music", although he often reviews indie or underground albums, with bigger names dropping in due to demand or relative acclaim. Anthony rates projects on a 0-10 scale, with the unique trait of the accompanying adjectives "light", "decent", and "strong".

Anthony is highly infamous for his at-times-controversial scores, having a particular penchant for giving albums a 6/10 rating (one of the most infamous examples being the universally acclaimed My Beautiful Dark Twisted Fantasy). To date, he has only given seven albums a perfect 10 in his reviews: Death Grips' The Money Store, Swans' To Be Kind, Kendrick Lamar's To Pimp a Butterfly, Kids See Ghosts' Kids See Ghosts, Daughters' You Won't Get What You Want, Spellling's The Turning Wheel, and Lingua Ignota's Sinner Get Ready.note In terms of unofficial perfect scores, Anthony made a series of videos in 2022 listing albums from before he started doing reviews that he would qualify for a 10/10: Daft Punk's Discovery, System of a Down's Toxicity, Björk's Vespertine, Godspeed You! Black Emperor's Lift Your Skinny Fists Like Antennas to Heaven, MF Doom and Madlib's Madvillainy, Lauryn Hill's The Miseducation of Lauryn Hill, Nirvana's Nevermind, Neutral Milk Hotel's In the Aeroplane Over the Sea, Wu-Tang Clan's Enter the Wu-Tang (36 Chambers), Depeche Mode's Violator, Metallica's Master of Puppets, Public Enemy's It Takes a Nation of Millions to Hold Us Back, Kate Bush's Hounds of Love, Talking Heads' Remain in Light, and Prince's Purple Rain.

On the flip side, Anthony is far from a Caustic Critic, almost always discussing albums in a calm, rational manner and often finding things to praise in albums he otherwise dislikes. As such, when he gets genuinely angry, disgusted, or irritated in a review, that's usually when you know that he hates it. These albums usually get slapped with a "NOT GOOD" rating rather than given a proper score, often bringing out his snark in the process. Only five albums have been rated 0/10: Kid Cudi's Speedin' Bullet 2 Heaven, Chance the Rapper's The Big Day, Green Day's Father of All Motherfuckers, Tones And I's Welcome to the Madhouse, and Ken Carson's X, although a few "NOT GOOD" albums have received reviews that are at least as scathing. In February of 2021, Anthony gave his first ever "NOT BAD" rating (to Steven Wilson's The Future Bites) indicating a pleasant surprise from an artist whose work he hadn't previously enjoyed.

Besides Anthony, there are also various cameos by his bizarre roommate/alter ego Cal Chuchesta, who has gained an immense following in his fanbase, to the point of releasing his own mixtape

(much to Anthony's chagrin

He has also has a number of series on his channels besides reviews that includes:

The show used to be highly popular on 4chan's music board /mu/, partially due to the fact Anthony himself was an avid user of the site, and birthed a great Fountain of Memes that Anthony wholeheartedly supported. Nowadays, however, he is a massively polarizing figure there (which might have something to do with him becoming one of the most famous music critics on the Internet), and Anthony has gone on record saying he hasn't frequented /mu/ in a long time.

, and his side channel (which contains op-eds concerning music news, responses to articles, and more miscellaneous content) can be found here

. Starting in 2020, he also started streaming listening parties and artist interviews on Twitch. His Twitch channel can be found here

Y'all know this is just my opinion, right?