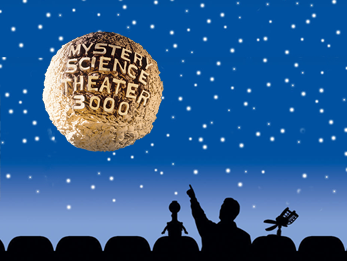 JOIN US.
Mystery Science Theater 3000, show 424, reel one
TURN DOWN YOUR LIGHTS (where applicable)
Advertisement:

Your experiment today is to Describe Mystery Science Theater 3000 Here.

Mystery Science Theater 3000 (MST3K) is a weekly television comedy series created by Joel Hodgson, and showcasing some of the most mockable films ever made. While the cast of MST3K changed quite a bit throughout its history, the basic premise remained consistent: A human test subject (the host of the show) has been imprisoned aboard the spaceship called the "Satellite of Love" by mad scientists ("The Mads") were they are forced to watch a series of bad B-Movies. The Mads hope to eventually discover a film that will drive their test subject insane, probably intending to find a way to weaponize it. In an attempt to keep their sanity, the test subject has recruited two Robot Buddies to sit with them throughout the entire film (although usually edited), commenting and cracking wise at the film's expense (a process known as "riffing"), as silhouettes on the bottom right-hand side of the screen, occasionally breaking for skits, analysis, and assorted nuttery.

Originally running from 1988 to 1999, the series was seemingly ended for good after a year on Minneapolis local television, seven years on Comedy Central, and three years on the Sci-Fi Channel. A Kickstarter and Shout! Factory-backed revival began on Netflix in 2017 and continued in 2018. Netflix declined to renew the show in 2019. In response, on April 7, 2021, Joel launched a second Kickstarter campaign with the intent on starting his own streaming platform to host new episodes of MST3K and other exciting projects in a post-COVID-19 world, known as "Gizmoplex", which would play a role in the new season. The campaign was successful, ensuring that a thirteenth season will be made. The new season is set to release on the Gizmoplex app on May 6, 2022

. A feature film was made in 1996, and Mystery Science Theater 3000: The Comic was published by Dark Horse Comics starting in 2018.

From 1988 to 1993, the series "host" was Joel Robinson,note series creator Joel Hodgson an eccentric, mellow inventor. Shot into space by his superiors at the Gizmonic Institute and forced to reside in the bone-shaped Satellite of Love, the goal was to use the bad movies to drive Joel insane, a fate he averted by building robotic companions Crow T. Robotnote Trace Beaulieu from 88-96, Bill Corbett from 96-99, Hampton Yount in 2017 and Tom Servo,note Josh Weinstein (not that one) from 88-90, Kevin Murphy from 90-99, Baron Vaughn in 2017 to help him make fun of the films. When Joel escaped in 1993, he was replaced by a temp named Mike Nelson,note head writer Mike Nelson a more active, alert, but perhaps thicker man. For the 2017 relaunch, the host is Jonah Heston,note Jonah Ray another Gizmonic employee (which is to say, another Cloud Cuckoolander genius) who got suckered into the experiment by means of a fake distress call.

As the victims of the movies came and went, so did the people inflicting that torture. At the show's start, the mad scientists (or “mads”) were the bombastic, sadistic Dr. Clayton Forresternote Trace Beaulieu and his dorky sidekick Dr. Larry Erhardt.note Josh Weinstein After the first Comedy Central season, Erhardt was replaced by “TV's” Frank,note Frank Conniff an eccentric space cadet. Frank, and Clayton a season later, were replaced by Clayton's mother Dr. Pearl Forrester,note Mary Jo Pehl whose reign as the show's lead villain in the three seasons on Sci-Fi Channel brought with it a thick-witted ape sidekick named Professor Bobonote Kevin Murphy and a wannabe-enigmatic alien called Observer.note Bill Corbett For the relaunch, Pearl passes the torch to her granddaughter Kinga,note Felicia Day as well as a TV's Son of TV's Frank, aka Max.note Patton Oswalt

Though it became a cult classic and middling success, the show is notable for staying close to its low-budget roots—all of its effects are practical, the sets tend to be assembled out of random nonsense, and the 'bots themselves are puppets. The actors were almost universally cast out of the writing pool, spent a lot of time Acting for Two, and tended to be The Danza when possible—see the character sheet for details.

The series' philosophy of "Keep Circulating the Tapes" (a phrase found in the end credits for several years) led to much of the show being easily found online; the show's creators encourage tape trading and file sharing, as the nature of film licensing would make many episodes otherwise unavailable.

During the show's time off the air, its alumni debuted similar projects. RiffTrax is the big one, a downloadable commentary service that has been around since 2006 and since expanded into live shows. Also notable are The Film Crew

The series has also inspired a lot of loving imitators, such as Theater Mode and Incognito Cinema Warriors XP (which turn the focus to schlock and exploitation), Unskippable and Retsupurae (for video games), and a subgenre of fanfiction called MSTing — all of which heroically attempt to remain faithful to the original show's guiding principle of turning bad art into good comedy.

The films shown on MST3K embody nearly every trope, cliché, and hackneyed plot device ever invented — which the crew of the Satellite of Love mercilessly call out. (For details of the episodes themselves, check out the Episode Recaps.)

open/close all folders
#-B
C-D
E-F
G-H
I-M
N-R
S-T
Crow: Did you ever wonder if this spaceship isn't really a spaceship at all, but a television set built for the amusement of the viewing audience? And I'm not really a robot, but a puppet built to look like a robot who is in reality being controlled by a puppeteer under this very table? And you're not a scientist slash inventor trapped in outer space, but just a comedian playing a part on a television show that you wrote?
Joel: (pause) I don't this so either, somehow...
U-Z
Waldorf: Oh, so they're stuck watching dumb movies?
Statler: They ought to take our place. Bet they wouldn't last two hours.
Waldorf: Two hours? They'd be lucky to last a minute watching the things WE watch!
Both: Doh-ho-ho-hoh!
Keep Circulating the Tapes
Feedback