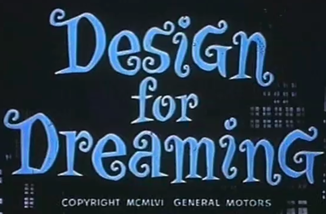 Design for Dreaming is a 1956 short film extolling the virtues and wonders of General Motors vehicles and the wildly implausible kitchen-of-the-Future.

The film itself is entirely in song, and begins with a woman being awakened by a masked man taking her to the 1956 General Motors Motorama, where she is introduced to several GM car brands, including Buick, Chevrolet Corvette, and Cadillac. She is then whisked into the "kitchen of the future" (because Frigidaire appliances was a division of GM at the time), loaded to the brim with futuristic (and implausible) appliances, destined to simplify the day for the housewife-of-the-future. Gamboling about and camping it up will apparently be the order of the day with the kitchen of the future.

An abrupt return to the Motorama features our plucky heroine dancing the "Dance of Tomorrow", followed by a presentation of more GM cars. Boarding the "fabulous, turbine-powered Firebird II", the masked man is unmasked, and the two drive off on the "Highway of Tomorrow".

Featured on an episode of Mystery Science Theater 3000. For that version, please go to the episode's Recap Page Of Tomorrow.