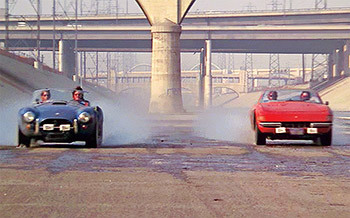 "The L.A. River, for all your car-chase needs!"
— Crow, Mystery Science Theater 3000
Advertisement:

(which would be dry in the summer if not for lawn runoff, and which has been put into concrete channels for almost its entire length). The river is pretty much gone now (except during sudden downpours), mostly due to urban development and diverting its tributaries. A major 1938 flood (yes, the river was once substantial enough that it overflowed its banks from time to time) that forced the recall of the then-mayor caused the Army Corps of Engineers to concrete the living daylights out of large portions of it, resulting in the grey manmade ditch you see today. Note that this is not the same as the L.A. sewer system.

Basically, these large concrete channels get a lot of mileage for chase scenes in movies because they look interesting, they allow for a lot of speed, there's no traffic you need to block or divert for filming, and they're conveniently nearby for any shows or movies produced in the Los Angeles area (that is to say, anything produced in Hollywood, which is quite a bit of stuff).

It's kind of like the urban car chase equivalent of Kirk's Rock. May overlap with Absurdly Spacious Sewer. Not to be confused with Down the Drain.

If you want to see the river in something approaching its natural state, go north to Van Nuys and the Sepulveda flood-control basin (another result of the aforementioned 1938 flood), east of Griffith Park for a 3-mile stretch (now open since 2013 to kayaking and boating), or south to San Pedro and Long Beach, where the river still flows into the sea, sans concrete. There have been many calls to try and restore the rest of the river to a natural state, but none of them seem to have gained much traction at local, state or Federal levels.

Compare with Artificial Riverbank for the Japanese equivalent built for similar reasons.