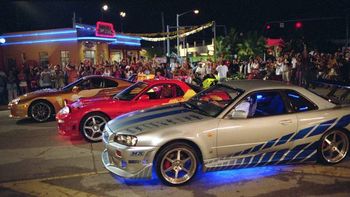 A sequence, scene, or even an entire work that overtly showcases a Cool Car - often, several cool cars.

Not every scene involving a Cool Car will be Car Porn. To qualify, the car or cars must be as much of the focus as any of the characters. If stationary, someone will invariably pop the hood, not to work on the engine, but so that others can admire it. Expect a lavish, Description Porn-esque spouting of specs, facts and figures as well. When the car is in motion, it will almost certainly be involved in a race, chase, or some other scenario that will showcase its performance. Expect shots to emphasize speed and danger, with in-car closeups of shifting and pedal work. Bonus points if the racing takes place at an iconic or historic real life racetrack. Cars will often be more waxed than a Brazilian, with gleaming chrome polished to a sparkle, and the camera will lovingly stroke their curves as if they were female flesh.

Due to a combination of Most Writers Are Male and Pandering to the Base, this trope will often coincide with more traditional forms of Fanservice. An attractive Wrench Wench may be among those working on the cars. Scenes outside of a garage may involve Hood Ornament Hotties, while at an official race, Pit Girls may be present. However, fanservice is in no way required for this trope, and despite the name, it will rarely - if ever - involve sex in or on a car. And in no way does it involve Rule 34 - that would be Cargo Ship.