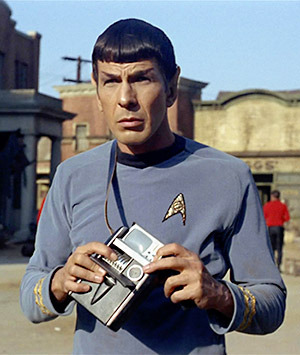 In space, no one can hear you scream. Unless they're using an Everything Sensor.

The Everything Sensor comes standard on the Cool Ship, and it does what it says on the box: It can detect and analyze anything. Literally anything. The Negative Space Wedgie, the Lost Technology, the Green Rocks, or whatever other Unknown Phenomenon our plucky explorers of space happen to run into. (Odd since, if it's an Unknown Phenomenon, how would the ship designers know to install something that could detect it? Those are some Crazy-Prepared engineers there...) It can even detect whether the ship is being scanned by someone else's Everything Sensor.

It will always come with an Enhance Button and at least one Thing-O-Meter. Sometimes its Readings Are Off the Scale.

If for some plot-based reason you need it to not see something, this is usually excused at the climax by "we didn't set it to scan for that in particular, but now that we know what we're looking for..." In rare cases, the Everything Sensor can't see the Techno Babble directly, but it can detect some byproduct of it. And if nothing else, you can always recalibrate the sensor by Reversing the Polarity.

In fact nearly every Cool Ship in a sci-fi franchise has some kind of sensor that can detect "lifeform readings" from orbit.

Not to be confused with an Everything Censor. Compare The Little Detecto, a more specialized device.