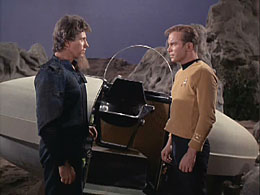 Kirk and one version of Lazarus.
Advertisement:

Opening shot: a lovely view of Spock's back. Just as he's giving his survey analysis of the uninhabited iron-silican planet the Enterprise is orbiting, everything rocks violently and we get a double exposure image of a nebula. Yeah, get used to this effect, you'll be seeing it a lot. Make a Drinking Game of it if you wanna get hammered. Once everything stops shaking, they realize that the planet is no longer quite so uninhabited.

Kirk, Spock and more Red Shirts than you can shake a stick at beam down to Kirk's Rock to find a crashed Flying Saucer. They also meet Lazarus, who rants about death and destruction as he takes a pratfall off the rock he's standing on.

Lazarus rants about a "monster" that destroyed his civilization that must be destroyed. According to Spock, there is no other life form on this planet. And... overlay of the nebula again.

Lazarus, meanwhile, has enormous mood swings and a scrape on the forehead that seems to disappear and reappear. And that beard goes from thin to thick after every ad break.