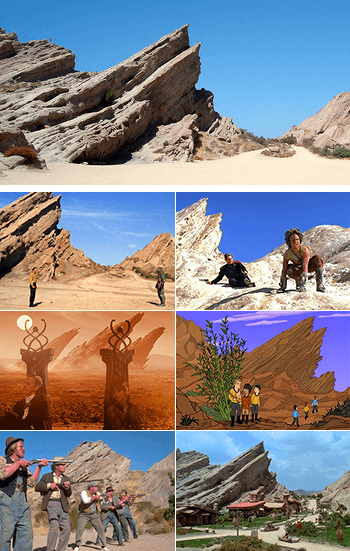 The American equivalent of the BBC Quarry, a distinctive set of striated sandstone slabs, dozens to hundreds of feet tall, sharply-angled and pointed at their tops. Familiar from its use as an exterior location in any number of Science Fiction programs and Westerns (including the films Blazing Saddles and The Magnificent Seven Ride Again, as well as the "Sleestak Diner" scene in Jay and Silent Bob Strike Back), and no few automobile commercials. It is also the location of the Brandeis-Bardin Institute, which was composited into the first five seasons of Power Rangers as the Command Center/Power Chamber building. The entire town of Bedrock in The Flintstones was constructed here. Probably best known from its several appearances on Star Trek over the years (especially the Original Series episode "Arena"), whence comes the popular nickname for one of the formations (and by extension the entire area). The movie Bill and Ted's Bogus Journey specifically points this trope out by having the boys watching said episode, before their robotic duplicates drag them out to the rock to kill them.

In reality these are known as the Vasquez Rocks Natural Area Park,

in Agua Dulce, CA (conveniently located about 30 miles north of Hollywood—in other words, the studio is not required to pay cast and crew extra for travel, accomodations, and on-location shooting), and were once a hideout of Tiburcio Vásquez, a notorious bandito who was one of the inspirations for the character of Zorro. Here's

the Wikipedia entry, with a detailed history of "Kirk's Rock" in TV and film.

Compare Down L.A. Drain, another Los Angeles setting used many many times in film and television. See Hey, It's That Place! for a general listing of very commonly used locales.