(Go West!) Sun in winter time
(Go West!) We will do just fine
(Go West!) Where the skies are blue
(Go West!) This and more we'll do
— Village People, "Go West"
Advertisement:

Welcome to California. It's the most populous and third-largest state in the United States (second largest in the Lower 48), nearly 800 miles from the northern border with Oregon to the southern border with the Mexican state of Baja California.note The U.S. state of California was formerly the Mexican state of Alta California—that is "Upper California"—(which also included the present-day U.S. states of Nevada, Arizona, and Utah), so it was named in relation to the still-to-this-day Mexican state of Baja California—"Lower California." When they first encountered the region, the Spanish did not realize that it was firmly connected to the North American mainland, and therefore named it after a fictional island utopia from a famous Spanish novel of the day. To the west is the Pacific Ocean, and to the east is the state of Nevada on the northern half and Arizona on the southern half. In between these borders lies some of the most gorgeous geography on the face of the Earth, but also nightmarish urban hellscapes and lung-clogging atmosphere. Summing up California in one article would be extremely difficult. It is home to nine national parks, the most of any state,note Death Valley, Joshua Tree, the Channel Islands, Sequoia, Pinnacles, Kings Canyon, Lassen Volcanic, Redwood, and the granddaddy of them all, Yosemite which contain the highest peak of the lower 48 states (Mt. Whitney) and, 76 miles away, the lowest point in North America (Death Valley). The state as a whole is host to 15 of the 17 types of biomes: vast elevated deserts, beautiful forests of mighty redwoods, valleys of sun-soaked vineyards nestled in golden hills, and majestic snow-capped mountains. Basically, if something exists somewhere on Earth, you will probably find it in California.

This strip of the West Coast of North America was first settled roughly ~20,000 years ago. Just like today, the climate and resources of this region made it highly desirable; pre-European contact, nearly a third of indigenous people living in the present-day U.S. lived in the California region, including hundreds of different groups speaking countless different languages. The population of Native Californians was drastically cut down by disease, starvation, and murder committed by the Spanish, who asserted control of the valuable region without large-scale settlement in part through a system of missions spearheaded by Junipero Serra in the 18th century.

Though it was not heavily settled by the Spanish (and later Mexican) people, Alta California was critically important as a hub of the Pacific trade and a gateway for the ships of Asia, Oceania, and South America to bring goods to the rest of North America. This drew many Americans to settle in the region, and the United States government soon began to desire it for themselves. During the early years of the Mexican-American War, following the lead of earlier American settlers in Texas, several Americans declared a revolution under a new flag boasting the image of a bear and set up an "independent" California Republic. Unlike Texas, this "independent nation" barely lasted a month before the U.S. officially annexed the region. Soon after, the discovery of gold in 1848 led to a massive population boom, and the territory was named a state. However, California's long vertical shape, which spanned both the North and South of the U.S., led to a protracted debate over whether it should be admitted as a slave or free state. Though a good number of Southerners occupied the (at the time fairly unimportant) southern half, California was admitted as a free state and joined the Union during The American Civil War.

Thanks to its idyllic climate, fertile soil, and prime Pacific location, California experienced massive and sustained population growth through the late 19th and 20th centuries, eventually surpassing New York as the most populous state by the early 1960s as people flocked from across the country and around the world in pursuit of jobs and opportunity. The state's history is unfortunately full of efforts to limit and shape this developing population, many of them very dark in nature. Americans accelerated the ongoing genocide of Native Californians throughout the 19th century in various acts of violence that were not publicly recognized by the state until 2019,note Even though California still technically is home to more Native Americans than any other state in overall numbers, they now represent only 1% of the state's total population. passed laws that limited or outright banned the immigration of Asian people, deported thousands of Mexican Californians (even those who had lived in the state for generations) during the Great Depression, and imprisoned thousands of Japanese Californians during World War II. The tension between this history of discrimination and the diversity of the state's citizens has led to moments of civil unrest, some of the most famous examples being the Watts uprisings of the 1960s and the Rodney King riots in the early 1990s. Both were protests against Police Brutality in Los Angeles experienced by its sizable African American population, most of which had come to California in order to flee Jim Crow segregation in the South only to be met by further discrimination. Not coincidentally, the Black Panther Party got its start and had the most local influence in California, specifically in Oakland.

Today, over 39 million people call the Golden State home (by comparison, Canada has a population of 36 million). This population fuels an economy that, in GDP terms, is the fifth largest in the world, behind only the United States itself (without California's contribution), China, Japan, and Germany, just ahead of the United Kingdom. Lest you think this means Californians are packed together like sardines, the state's massive size bears repeating. California has about half the population that a comparably-sized state theoretically would have on the East Coast. While the Bay Area is one of the most densely packed areas in the country, most Californian metro areas sprawl out over miles and miles of suburbs blanketing the coast and Central Valley. Californians generally have as much or more room to move around as those in the East and would have even more if things were more evenly distributed; the eastern half of the state is some of the least populated land in the country, with miles and miles of parkland and wilderness.

As mentioned above, California is the most ethnically diverse state in the Union, and it's not unusual to walk down the street in a major city and overhear conversations in Russian, Japanese, Chinese, Vietnamese, Spanish, Tagalog, Hmong, Korean, Greek, and German all in 2 minutes. This results in numerous fusion restaurants that serve some of the nation's most delicious (and expensive) cuisine. Southern California is home to the second-largest city in the USA, Los Angeles. Northern California is home to its most visited city, San Francisco, as well as numerous left-leaning small towns, rich veins of gold, and the traditional State Capital No One's Ever Heard Of (Sacramento). Northern California also has the distinction of hosting an abundance of environmentally-conscious yuppies living cheek-by-jowl with an abundance of prickly survivalists.

Despite its current national reputation as a liberal stronghold, California is a very politically mixed place. The California coast, particularly Los Angeles and San Francisco, is indeed characterized by social liberalism, but residents there are often more moderate, even conservative, on fiscal issues. Its inland counties, meanwhile, are made up of provincial backwaters and farming communities that retain very traditionalist views of politics and culture and vote strongly Republican. This leads to a certain amount of internal political conflict split down rural vs. urban and coastal vs. inland lines.note Complaints abound that Los Angeles and San Francisco own the state government and don't give a damn what everyone else wants. Those urban areas do hold a very sizeable chunk of the voting population, but rural residents frequently resent having things like gun restrictions, gas taxes, etc. dictated to them by cities they don't live in that are hundreds of miles away. Gun control and immigration policy are contentious issues, suffice it to say. Furthermore, since Californians have the option to vote on propositions for state laws and initiatives that can be put on the ballot by a petition of voters, California businesses and religious groups can mobilize conservative voters to directly push through legislation or vetos that elected officials would not. This has produced a political culture that seeks to regulate certain aspects of big business but is generally averse to high taxes and worker protections, a situation that generally pleases no one and has resulted in a number of fiscal crises despite the size of the economy.

There are other divisions in the state as well. For one, the northern and southern parts of the state are always arguing over water rights—Los Angeles doesn't have the water to sustain its population and needs to pump it in from NorCal and neighboring states, while farms in the Central Valley (the most productive agricultural region in the U.S.) need all the water they can get. Many of California's conservatives would like to see the state split up into three or four smaller ones so that SoCal couldn't drain their resources as easily and they could have more autonomy, but even NorCal is dependent on resources from neighboring states and the economies of the big cities to get by, so those complaints are not likely to result in the state fragmenting any time soon. However, frustrations with the state have led to many Californians choosing to leave in the last decade; nearly a century of tremendous population growth finally slowed in the 2010s due to outmigration to other Sunbelt states, creating ripple effects throughout the country whose long-term affects have yet to be determined. Don't get it twisted, though: California is still by far the most populous state in the USA, with over 10 million more residents than nearest runner-up Texas.

To outsiders, California is characterized by: 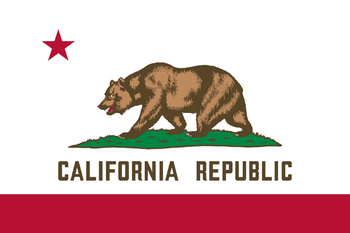