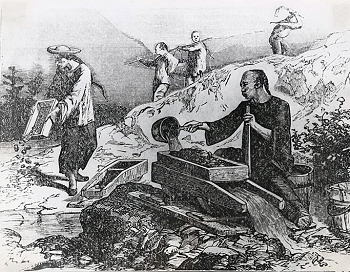 "I advertised extensively for men, wanted several thousand, and was never able to get over 700 or 800 white men at one time. We increased finally to 10,000. A large number of men would go on to the work under those advertisements; but they were unsteady men, unreliable. Some of them would stay a few days, and some would not go to work at all. Some would stay until pay-day, get a little money, get drunk, and clear out. Finally, we resorted to Chinamen. I was very much prejudiced against Chinese labor. I did not believe we could make a success of it. I believe Chinese labor in this country on that kind of work never had been made a success until we put them on there; but we did make a success of them. We worked a great many of them, and built the road virtually with Chinamen."
— James H. Strobridge, Central Pacific Railroad foreman, testifying before the US Congress in 1876
Advertisement:

The California Gold Rush of the mid-Nineteenth Century coincided with a time of dire economic conditions in China. So it was natural that when they got wind of the gold rush across the Pacific, thousands of young Chinese men migrated to the United States to mine the gold fields. Their industry and teamwork were at first admired and appreciated, but as viable gold strikes played out and fresh mines became scarce, the white majority resented the foreigners (who were forbidden by law from becoming citizens) and laws were passed in an attempt to force the Chinese out of the mining business.

However, a new economic opportunity opened up in the form of the Transcontinental Railroad. This project required many low-paid laborers for dangerous and arduous work; and the head of the Southern Pacific end of the Transcontinental project decided to hire the lean and hungry Chinese of California. They did such a good job that more Chinese labor gangs were hired directly from the homeland.

After the Transcontinental line was built, railroad construction continued to boom in the Western United States, and the now experienced Chinese eagerly took on these new jobs. The population of Chinese men in America swelled.

Unfortunately, this large population was largely bachelors and stuck out considerably. Relatively few Chinese women chose to immigrate for various reasons, and of those many were blocked by laws theoretically in place to prevent prostitution. As anti-miscegenation laws barred Asian men from marrying white women, they had to seek companionship and diversion in other, extra-legal ways. The distinctive queue worn by Chinese men was made mandatory by their homeland's government, and they were barred from re-entry if they had lost it, meaning that most of the immigrants to the U.S., who planned to someday return, could not adopt less conspicuous hairstyles. And as many Chinese immigrants were essentially forced to live in "Chinatowns" for their own safety, many did not learn English very well if at all.

This very distinctive and poorly-assimilated minority stirred fears of a Yellow Peril, and racist discrimination and attacks against the Chinese were common, culminating in the Chinese Exclusion Act of the late 1880s, which banned Chinese immigration entirely.

In the fiction of the Nineteenth and early Twentieth Century, this trope often a sinister figure who fills the ranks of a Secret Society and lusts for the pure white women that the hero must protect. About the time of World War II, when China became the United States' ally, the depiction shifted, and the Chinese laborer tended to be shown as the victim of prejudice and needing the help of a white hero to save him from bigots. Modern depictions tend to be a bit more nuanced... we hope.

The generic term for exported Asian laborers in the nineteenth and early twentieth centuries was "coolie." This word was often used as a pejorative, and many people of Asian heritage find it offensive, so it should only be used in its historical context.

The supertrope is Ethnic Menial Labor.