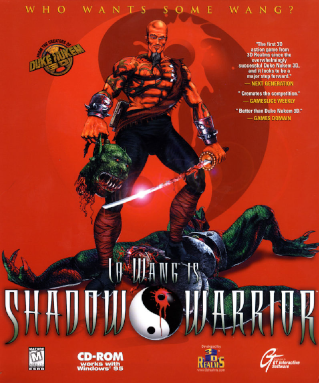 Who wants some Wang?
"Ha ha! You no mess with Lo Wang!"
Advertisement:

A First-Person Shooter based on the famous Build engine of Duke Nukem 3D fame, Shadow Warrior had the misfortune of being released in 1997, when the sprite-based shooters were already showing their age (compare Blood, which was based on the same engine and released the same year, but is better remembered). Among the first shooters to contain now-common features such as controllable vehicles, alternate weapon firing modes, bosses with more going for them than lots of HP, and lower enemy variety with slower pace. The game, like most of the other Build engine games like it (particularly Redneck Rampage), is characterized by its crude humor and by gratuitous application of the Rule of Cool.

The player controls Lo Wang, the eponymous Shadow Warrior, a former employee/bodyguard of Zilla Enterprises... until he found out that Master Zilla was summoning monsters from the netherworld and plotting to Take Over the World. Being a man of honor, Lo Wang quit the corp, but Zilla decided that if Wang will not be on his side, then he has to die. Now, of course, Lo Wang sets out to reach Zilla and thoroughly kick his gluteus maximus - partly to save the world, but primarily out of revenge for the death of his former teacher, Master Leep.

Two expansions were released, both for free: Twin Dragon in 1998, and Wanton Destruction in 2005 (when the former CEO of the company that developed it randomly stumbled across it on a CD full of add-ons the company had created). In the former, Lo Wang battles his Evil Twin brother, Hung Lo; in the latter, he faces Master Zilla for the last time. A third expansion titled Deadly Kiss, starring Wang's sister Tensi Yoka, was announced in early 1998 but never materialized.

The original can be bought with both expansions

on GOG.com. A reboot was released in 2013 by Flying Wild Hog, the same developer as Hard Reset, and introduces a robust skill upgrade system, the ability to use Ki Manipulation and rendering the humor slightly less racist (but still immature as expected). To prepare people for this remake, they released the original game on Steam as a free-to-play title

. In addition, a slightly Updated Re-release with Steam Achievements and OpenGL-compatible versions of the game and its expansions is available for purchase on Steam.

Not to be confused with the former European title of Ninja Gaiden.