China Takes Over the World 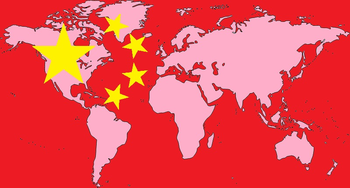 ALL People's Republic of China.
"When China wakes up, the world will shake."
— Napoléon Bonaparte (in 1817)
Advertisement:

Both the younger and older sister trope to Japan Takes Over the World, China Takes Over The World is when a future version of China, these days usually the People's Republic of China, becomes a major military and economic power rivaling, if not exceeding, the United States. It may also be one of the major powers backing or participating in a Third World War. Combining the Yellow Peril and the Red Scare, the PRC and its military assets provide a useful foil for the United States and the European Union, be it on the way international trade swings or on issues such as a certain island.

This trope has existed in one form or another since the mid-late 19th century, when fears over mass immigration of Asians led to racist and xenophobic political actions by governments in Europe, Oceania and North America. It actually predates not only the People's Republic of China (which won the Chinese Civil War in 1949) but also the fall of the Empire Of the Qing (in 1911). Chinese military power and global influence has risen and fallen for centuries, but it's always remained among the most populous countries on earth, with a long tradition of scholarship and invention, making it a very realistic candidate for superpower status.

The People's Republic of China began to focus on export-driven growth (and thus gained economic influence in the world) under the economic reforms of Deng Xiaoping, but it wasn't until The '90s that it began to assert itself as a world power. Since the mid-to-late 2000s, this trope has become firmly established as China in Real Life grew into a position of genuine global influence. China's economy has grown from a very weak position in the 1980's to being one of the world's biggest, and its military and diplomatic positions have grown at a similarly rapid clip.

These rapid political changes have made speculative plots about China as a global power (possibly a global villain) have become increasingly appealing, as the nation's power in Real Life has grown. Though The New Russia is still often used as a source of plots and characters (the connections between the two nations sometimes being mentioned). Interestingly, the opposite affect has also proven true, as studios have sometimes proven reluctant to cast China as the villain, because China is a growing market for movies, and they don't want to risk their box office returns.

A US political ad warns of a future where China runs the world, because the US spent itself into massive debt.

A US political ad warns of a future where China runs the world, because the US spent itself into massive debt.