Africa Is a Country 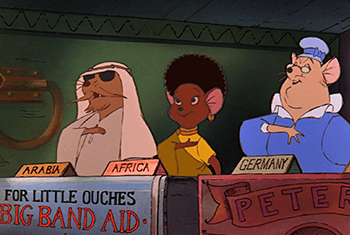 Ah yes, the country of Africa. Samuel L. Jackson came from there, right?
"In your text, treat Africa as if it were one country. It is hot and dusty with rolling grasslands and huge herds of animals and tall, thin people who are starving. Or it is hot and steamy with very short people who eat primates. Don't get bogged down with precise descriptions. Africa is big: fifty-four countries, 900 million people who are too busy starving and dying and warring and emigrating to read your book. The continent is full of deserts, jungles, highlands, savannahs and many other things, but your reader doesn't care about all that, so keep your descriptions romantic and evocative and unparticular."
— Binyavanga Wainaina, How to Write About Africa

Africa just can't catch a break, can it?

The main character and his crew journey to Britain, Croatia, Ukraine, and Poland in order to fight against evil. The work does its best to properly reflect the culture and diversity of Europe as long as it's relevant. But our heroes cannot stay in Europe. Now they must brave the land of Africa.

"Where in Africa?" You ask? Well... Africa. It's just one big country, right? Full of starving black children?

No? Well there's a book about this right... there it is.

There is a longstanding misconception that Africa is just one giant country. This comes from lack of cultural awareness regarding the continent compared to others but some choose to remain ignorant. When a work takes place in a country or culture other than the target audience's, creators will go with what they know. The average American audience might be more aware of the love rich culture of France and the beef-rich cuisine in Germany than the urban cities of South Africa or the dense rainforests of Madagascar. So a mostly white team to a mostly white audience would just lump the whole thing together. Or better yet refer to it as Nigeria when the story is clearly taking place in Sudan.

The very large motley of cultures in Africa might be stereotyped and crudely amalgamated. Most of the Africans in-story might be living in villages or mud-huts. And even if it's respected as an intelligent and innovative society (in possession of phones, having a local KFC, teeming with business), it will still be known as just Africa instead of a particular country. Good luck finding an average Joe who can name an African country other than "Egypt", "Nigeria" or "South Africa", and that's if he even considers them countries rather than regions.

Even African-Americans are sometimes guilty of this trope, because they are thoroughly Westernized and consume Western media. A perennial failure is the attempt to "reclaim the culture of their homeland" with zero knowledge of what it means, resulting in cultural appropriation. An example is the erroneous usage of Swahili, a language from Eastern Africa that would have been totally foreign to the ancestors of most African-Americans, who came from Western Africa.note although Swahili is known within Africa for being the closest thing to an official language of pan-Africanism, so there may be some overlap with that concept. In fact, the very term "African-American" became so much more prevalent than "European-American" for white Americans in part because of this trope. While European-Americans are usually well aware of which European country their ancestors came from and thus are more likely to call themselves "Irish-American", "German-American" etc, the descendants of slaves usually only know their ancestors were abducted or purchased from somewhere in Africa.

Northern Africa is an exception to this stereotyping, because it is culturally, demographically, and historically distinct from sub-Saharan Africa, having experienced an extended period of Roman and Arab conquests since antiquity. That is not to say that it does not have its own problem of generalization, though that means this trope rarely applies to it.

It is sad to say, but the trope is very much still in play in popular culture. Even satirical works often fall victim to this trap. In contrast, its sister trope, Interchangeable Asian Cultures, is slowly going into Dead Horse Trope territory by this point. This is cyclical, as Asia has seen its population gaining more and more representations in Western pop culture, fighting off generalization. Africa, on the other hand, has little representation in mass media. Longstanding racism and xenophobia from foreigners, not to mention the appearance of instability or the perception thereof, mean that barring some places, it is rarely visited by foreigners, perpetuating its status as an eternally unstable "country".

This trope is for when the African continent and its people are generalized to the point of undermining their diversity. If Africa is seen as one big continent and not a country, this trope does not apply. Even when not demonstrated in-story calling it a continent comes with the pre-existing notion that there are multiple countries and cultures within it. Neglecting to portray Africa in any capacity counts as a complete aversion of the trope, if displaced Africans and Afro-American/British culture are present. This trope also does not apply if other nations are referenced by their continent name, this is Global Ignorance, as the whole world is being generalized for ease rather than out of ignorance. A particular country does not have to be mentioned for this trope to be averted, an understanding of Africa's diversity in the work or an equal level of ignorance presented when depicting other continents will do.

Tropes Are Tools, of course. Like other continents, Africa is home to a variety of cultures, languages and countries, so creators might want to simplify things. That said, creators should do some research rather than generalizing a continent worth of people they do not know.

Wikipedia includes this in its list of African stereotypes. Africa is home to over 50 different countries with their own distinct cultures, histories, and backgrounds. On scale to most of European history. 25% of the languages spoken in Africa are not recognized by international agencies like the United Nations, which is a testament to its diversity.

Subtrope to Global Ignorance. Compare Interchangeable Asian Cultures and Mayincatec, where Asian and Native American cultures are treated similarly Ancient Grome and Scotireland are where European sub-cultures are mixed for the sake of ease rather than stereotypes. Spexico is where Spain and Mexico (and by extension, other Hispanic countries) are seen as one and the same. See also Darkest Africa, where the entire continent is depicted as a dark and mysterious place, and Bulungi, a fictitious African country which incorporates many of the same stereotypes. Often linked to Developing Nations Lack Cities when Africa is just seen as rural and poor with no metropolis area.

If much or even all of Africa's many countries merged into a single super-state, see Space-Filling Empire.