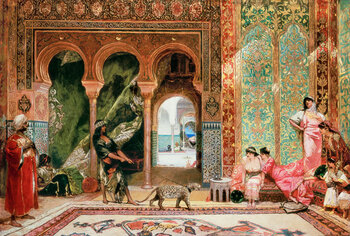 A Royal Palace in Morocco by by Benjamin Jean Joseph Constant
The Orient that appears in Orientalism, then, is a system of representations framed by a whole set of forces that brought the Orient into Western learning, Western consciousness, and later, Western empire. ... The Orient is the stage on which the whole East is confined. On this stage will appear the figures whose role it is to represent the larger whole from which they emanate. The Orient then seems to be, not an unlimited extension beyond the familiar European world, but rather a closed field, a theatrical stage affixed to Europe.
— Edward Said
Advertisement:

The so-called Orient: Stretching from Morocco to Japan and including everything in-between. Seen through classic European glasses as being one single entity - one of mystery and adventure, where white men can display their superiority and masculinity over the decadent and feminized "orientals".

The development of this ethnocentric vision of "the Orient" preceded imperialism and colonialism but it remained in place even after conquest and discovery of new lands and people, even after finding new and fresh sources of information to correct earlier interactions and even after being removed and thrown out by decolonization movements. After a time, people simply used the same stock of stereotypes repeatedly to refer to the same land as if they couldn't bother changing or correcting their first impressions, and thanks to Pop-Cultural Osmosis, those collection of first impressions still remains most people's idea of "the East".

Orientalism is a particular set of overarching stock stereotypes about everything and anything east of Greece. Orientialism also relates to the idea of the East being an exotic locale, a place where Suspension of Disbelief is a little easier for Western audiences. Just as an example, the original Green Lantern found his magic ring and lantern in Chinatown. Why not Little Italy? There are plenty of stories of European magicians and daemons, but the Chinatown shop serves as a jumping off point for something mysterious, anachronistic, and magical in a modern setting. Hence, Orientalism.

Compare and contrast "Arabian Nights" Days (and its modern successor Qurac), Mystical India, and Far East. In recent years, people have used the concept of Orientalism which originally applied to "the Levant" and the Middle East, to the cultures of the Sinophone and extended it to refer to regions that are not Asian (such as Africa, South America and Polynesian tribes).

For a slightly different type of comparison see the concept of Ruritania, which has been interpreted as an Orientalizing take on parts of the world which are otherwise explicitly European.

See also the other wiki

Tropes that commonly appear in conjunction with orientalism, but are not in themselves part of it: