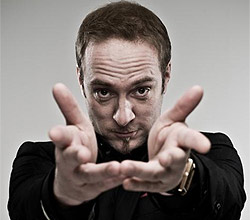 Whatever you do, don't look into his eyes.
"A hundred years ago they would have burnt him at the stake."
— Bizarre Magazine
Advertisement:

Derren Brown (born 27 February 1971) is a prolific magician and hypnotist whose TV work mostly involves combining these two skills into something popularly described as 'psychological illusion.' His shows often utilise so many layers of secrecy and deception that nobody involved ever quite knows where they stand.