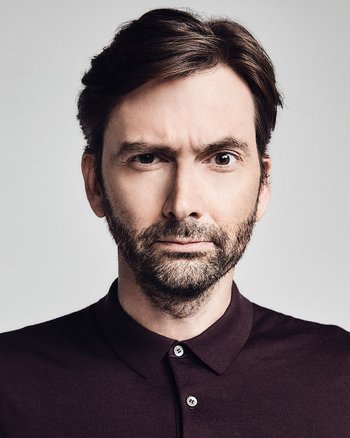 ALLONS-Y!
"'Splendid chaps, all of them. I think that's the traditional answer to that question.'"
— David Tennant (when asked "If you could be any Doctor, who would you choose to be?", Comic-Con 2009

Doctor Who himself. Again.

A Lothian-born bloke, David Tennant was born David John McDonald on 18 April 1971 in Scotland but had to adopt a screen name for guild reasons (the "Tennant" coming from the last name of Neil Tennant of Pet Shop Boys, whom David read about in Smash Hits magazine). Best known for The Tenth Doctor, Kilgrave in Jessica Jones, Alec Hardy in Broadchurch, Crowley in Good Omens, and the lead role in a Casanova miniseries. In Harry Potter and the Goblet of Fire, he plays Barty Crouch Jr., who is played by Brendan Gleeson for most of the movie, but Tennant does get a few scenes to display his... "eager" face (his face is wonderfully expressive, as you can see in any of his TV or film work). Played "Dangerous Beans" in a BBC radio adaptation of the Discworld novel The Amazing Maurice and His Educated Rodents. Did manage to get a role as a very convincing pre-op trans barmaid on Rab C. Nesbitt. He auditioned several times for Taggart and failed each time.

In 2008, he played Hamlet in the Great Performances production of Hamlet from the Royal Shakespeare Company alongside Patrick Stewart. The film adaptation can be viewed on PBS' website.

In 2011, he played Benedick opposite Catherine Tate in a production of Much Ado About Nothing. In 2013-2014, he played Richard II for the Royal Shakespeare Company.

Tennant is also a Promoted Fanboy. A Doctor Who fan since childhood, he specifically went into acting to play the Doctor (in a strange case of irony, his first big role was in something called Takin' Over the Asylum) and has shown himself to be quite knowledgeable about the history of the series in interviews. He Jumped at the Call for bit parts when Scream of the Shalka and Big Finish Doctor Who were produced (and has since returned in the role as the Tenth Doctor for the latter). Contrary to rumour, he did not audition for the role of the Ninth Doctor, but was working with Russell T Davies when the role became available and was asked to play the Tenth Doctor without auditioning. His Doctor and Tom Baker's Doctor are generally considered the two best Doctors by the fandom, and Tennant is now regularly winning "Best Doctor" polls.

Contrary to an infamous question on The Million-Pound Drop, he's not the longest-running Doctor. That record still belongs to the seven-year run of Tom Baker, although how one counts the "Wilderness Years" makes this up for debate. He left Who after the 2009 specials. When he initially announced his departure at the National Television Awards, the fangirl (and fanboy) screams shattered glass fifty miles away. He was replaced by Matt Smith's Eleventh Doctor.

He married Georgia Moffett in December 2011 (and has five children with her: Olive, Wilfred, Doris, Birdie, and Ty - Moffett's older son whom he also adopted), who not only played his Opposite-Sex Clone in "The Doctor's Daughter" but is also ex-Doctor Peter Davison's real-life daughter. (And guess who inspired Tennant to go into acting? Right in one. David Tennant is now the ultimate Promoted Fanboy.) Sorry, ladies (and gentlemen).

Tennant was the host of Masterpiece Contemporary for one season before that title was discontinued and the show was divided into Masterpiece Classic and Masterpiece Mystery.

In 2013 he starred as Alec Hardy in the worldwide hit Broadchurch, and played the same role in the less-successful American remake, retitled Gracepoint. Meaning he was playing different versions of the same character concurrently in two different shows, on both sides of the Atlantic. His co-star in the UK show, Jodie Whittaker, was later cast as the Thirteenth Doctor, making it pretty Hilarious in Hindsight whenever they appear together.

In 2015 he starred in Jessica Jones as Kilgrave, a villain whose main traits are his mind control and use of Doctor-isms to give a compelling and creepy performance.

He was hard to avoid on The BBC on Christmas 2009 — he was even in the Station Idents which were repeated concurrently on BBC America.

He is a public supporter of the Labour Party, delivering a very scathing criticism of David Cameron in early 2010 as well as providing the voiceover for Labour's 2010 Election Broadcast, although he avoided political commentary during his tenure as the Doctor because he felt it was improper. In 2011, he played showy vampire slayer Peter Vincent in the Fright Night (2011) remake, and romantically confused author James Neil Arber in The Decoy Bride. In 2012, he had a minor voice role as Professor Huyang, the lightsaber construction droid, in Star Wars: The Clone Wars, a role for which he won a Daytime Emmy.

In 2013, he played the role of DI Alec Hardy in Broadchurch and announced his return for Who for the 50th Anniversary Special. The next year he joined the American remake of Broadchurch, Gracepoint, in a different role but essentially the same character. He also hosted Comedy World Cup, a Panel Game based on comedy history and trivia. Tennant also voices the Teenage Mutant Ninja Turtles incarnation of Professor Honeycutt/The Fugitoid.

In December 2016, it was announced that he would be the new voice of Scrooge McDuck in the new DuckTales reboot, in the first time the character has been voiced by a real Scot (making his real last name another big piece of Hilarious in Hindsight).

In 2017, it was announced that Tennant will play Crowley in an adaptation of Good Omens, which was made available for streaming on Amazon Prime Video in 2019.

In 2018, he debuted as the villainous Lord Commander in the TBS animated Space Opera, Final Space.

In 2019, he started a podcast, David Tennant Does a Podcast With...

, in which he interviews various famous people he knows.

He reprised the role of the Tenth Doctor for the 50th anniversary special Day of the Doctor. He will also play the Fourteenth Doctor in 2023 for the 60th anniversary, reuniting him with former co-star Catherine Tate. This makes him the first actor to play the Doctor in two regenerations, three if the Meta-Crisis Doctor is counted separately.

He likes Kate Bush, Coldplay, The Proclaimers, Come Dine With Me, Firefly, and Honey Nut Shredded Wheat. Deal with it.

Tropes associated with this actor's works include: