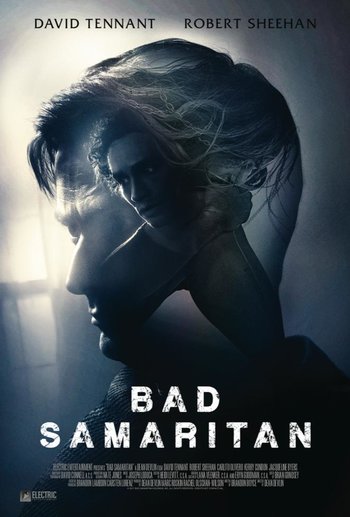 "You know why you're not in their little jail right now? Because you're in mine."
— Cale Erendreich
Advertisement:

Bad Samaritan is a 2018 Psychological Thriller film, directed by Dean Devlin and written by Brandon Boyce.

Sean Falco (Robert Sheehan), a struggling artist, runs a criminal business with his friend Derek Sandoval (Carlito Olivero). They use their jobs as car valets as a front to case the homes of their wealthy clients with a view to burgling them. The scam is working out well for them, until one day they target the home of Cale Erendreich (David Tennant) and stumble across a young woman (Kerry Condon) being held captive inside the house.

When a police search of the house yields nothing, Sean tries moving on with his life, but quickly finds that Erendreich isn't someone who lets those who know too much get away so easily...

Not to be confused with the Netflix series Bad Samaritans, or the trope.