Spanner in the Works 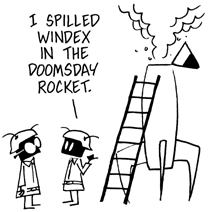 I wouldn't be too worried, especially if they plan to launch that rocket at us.
"A common mistake people make when trying to design something completely foolproof is to underestimate the ingenuity of complete fools."
— Douglas Adams, Mostly Harmless
Advertisement:

They are the bane of the Clock King. They are the worst nightmare of Manipulative Bastards everywhere. They are the monster in the closet that haunts The Chessmaster every time they close their eyes. Their very presence causes even David Xanatos himself to freeze in utter terror, who can only watch as his master plan crumbles down into dust.

Meet the Spanner in the Works.

Whether it's The Ditz, The Fool, Inspector Oblivious, or a monkey Geddit? Because another word for "spanner" is "monkey wrench", and having a literal monkey ruin your plans is a Stealth Pun, the Spanner in the Works is the miscreant capable of derailing the most ironclad of plans by unknowingly taking an option that the planner hadn't even considered. They ruin the implausible Gambit Roulettes by exploiting their one, intrinsic flaw: their reliance on Contrived Coincidences, rigid patterns, and the assumption that nobody would be stupid enough to actually push the Big Red Button or fight the apparently unstoppable robot.

How can they outdo the master at his own game with nothing but stupidity and clumsiness? It's precisely because these characters are the fools and tools of fate that they are uniquely placed to derail these schemes with the gentleness of a butterfly flapping its wings... of doom!

Put another way, the Spanner is an author's walking deconstruction or Lampshade Hanging of the Theory of Narrative Causality: as easily as a plan or plot can come together, it can be pulled apart even easier with the tiniest, most ridiculous thing.

When the character ruins a protagonist's plans by unknowingly doing something small but crucial, he becomes an Unwitting Instigator of Doom. When the Spanner can trigger a series of coincidences, it's Disaster Dominoes. When the plan is screwed and the character is also aware that he will screw the plan, and doesn't care, he becomes a Leeroy Jenkins. Occasionally, may be Mistaken for Badass. If the focus isn't on them, they're often an Unknown Character.

Compare Finagle's Law, It Began with a Twist of Fate, Nice Job Fixing It, Villain, Outside-Context Problem, Remembered Too Late.

Opposite of the Unwitting Pawn, often is the Unwitting Pawn until the final crucial moment. This is the main cause of Didn't See That Coming, this trope being the "that". Quite often an Achievement In Ignorance. Inverse of Unintentional Backup Plan, where a character accidentally completes an imperfect plan that would have otherwise failed. Compare with Out-Gambitted, where someone's plan is (or could have been) successful but ineffective against a better-thought-out plan. Compare Too Dumb to Fool, where the character is too stupid even to be baffled by explanations. Also, compare Evil Cannot Comprehend Good, where the flaw is that the villain can't see someone being generous or brave or honest enough to foul up his plan.

The specialty of The Fool. See also Immune to Fate, for characters that manage to be this to Fate itself.

The trope is reputedly named for the Industrial Revolution-era practice of disgruntled workers throwing a spanner into a machine, either because of fears that machines would put them out of work, or as a bargaining chip for better working conditions (and often because they were the only ones who knew how to repair the machines as well). Disgruntled French workers also did this by throwing sabots (wooden-soled clogs) into machinery — giving us the word sabotage.

(Note for Americans reading this: "Spanner" is the British English word for what you would call a "wrench". It has nothing to do with a Long Runner in development. The equivalent American phrase specifically involves a monkey wrench, known in the UK as a gas grip — "He really threw a monkey wrench into my plans.")

Incidentally, the word "spanner" is also a British slang word for "moron", which is rather fitting.

Not to be confused with A Spaniard in the Works, which was a 1965 book by John Lennon of nonsensical sketches and drawings whose title was a wordplay on this expression.

Often an ending trope, spoilers may be ahead.