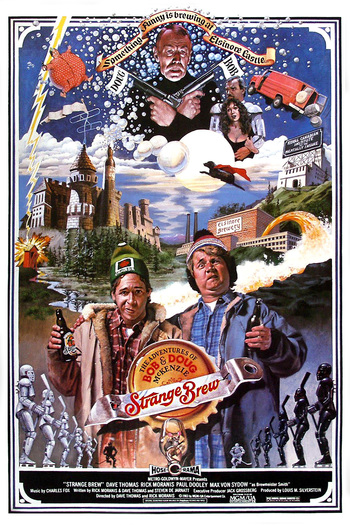 Strange Brew is a 1983 Canadian comedy movie written by, directed by, and starring Rick Moranis and Dave Thomas, based off of their "Great White North" sketches from SCTV.

In it, half-wit Canadian brothers Bob and Doug McKenzie (Moranis and Thomas) plan to obtain free beer by working at the Elsinore Brewery, where Pamela Elsinore (Lynne Griffin), the heiress, is troubled over the death of her father, John Elsinore, the owner of the brewery. Unbeknownst to Bob and Doug, but knownst to Pamela, Brewmeister Smith (Max von Sydow) wants to unleash a hostile takeover to release a hypnosis-laced beer to the world.