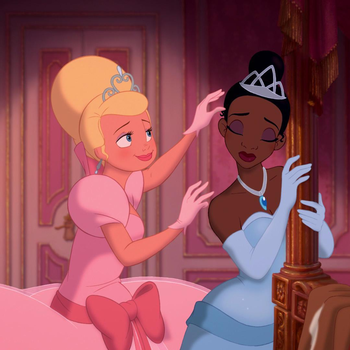 Now they can both be princesses!
"She is literally the Polaroid of perfection
She has everything and she'll give it to you in a second
Looks can deceive, she wears her heart on her sleeve"
— China Forbes, "Ordinary Girl" (theme to Clueless)
Advertisement:

The Spoiled Sweet character is a naive, spoiled, rich, or comfortably upper-class or upper-middle-class girl, who has everything she could ever want, but instead of being mean, she is as nice as can be to everyone. While still spoiled, slightly naive, perhaps shallow, maybe even a bit selfish at times, when it comes right down to it, she is a loyal friend and doesn't use her money or popularity as an excuse to treat everyone like garbage — though the trope Rich in Dollars, Poor in Sense is in play, especially since a particularly common sticking point is that characters of this type often believe their friends and other loved ones deserve to live just as well as they do. She might also be an Innocent Bigot. If she is in school, she’ll likely be the Class Princess.

A mild warning to prospective writers — the Spoiled Sweet card must be played carefully. If the writer isn't careful, she'll just wind up as a Canon Sue or a whiny, ditzy little brat and may even turn into Condescending Compassion.

Differs from Jerk with a Heart of Gold in that she's always outwardly nice to begin with; if she's a Jerk with a Heart of Gold, she doesn't belong here. She may end up a Sheep in Sheep's Clothing if other characters assume she'll be a jerk because she's rich and pampered. Note that a Spoiled Sweet character doesn't have to be always nice to qualify; this kind of character is certainly prone to a selfish moment or two, or even a What the Hell, Hero? moment if her selfishness gets the better of her, but neither do just a few sweet moments count. Just being rich and not a jerk doesn't qualify her either. A good baseline description would be a friendly character who's quite accustomed to getting her way, even insistent upon it, but is willing to take "No" for an answer if getting her way means hurting others.

A Sub-Trope of Idle Rich. Almost always overlaps with Nice to the Waiter.

She might become somewhat of an Auntie Pennybags when grown up. Also, if the Spoiled Sweet character loses her money and position, she'll be a Fallen Princess. If she's a princess, she'll likely become one of the Royals Who Actually Do Something as an adult.

Even though Charlotte is the daughter of the richest man in New Orleans, she is still friendly to those who aren't as well-off as her, like Tiana.

Even though Charlotte is the daughter of the richest man in New Orleans, she is still friendly to those who aren't as well-off as her, like Tiana.