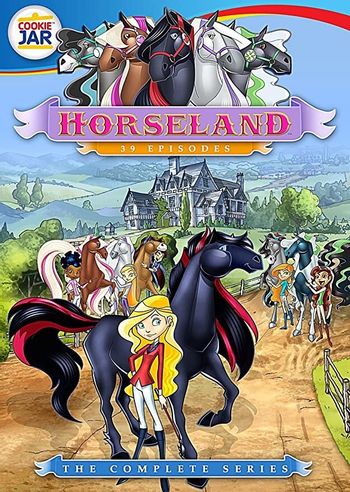 Let’s go to Horseland!note Clockwise, from bottom: Sarah and Scarlet, Molly and Calypso, Chloe and Chili, Bailey and Aztec, Zoey and Pepper, and Alma and Button. Not pictured: Will and Jimber, Shep, Teeny, Angora, and Nani and Sunburst.
An animated series based on a virtual pet game by DiC Entertainment.
Advertisement:

It stars a bunch of teenage kids, primarily focusing on four of them — Sarah, Alma, Molly and Bailey — at a horse ranch called, you guessed it, Horseland. In Horseland, the horses and animals living there are capable of human speech whenever the humans are not around. It features your typical teen problems and various situations involving horses. Each episode is narrated by Shep, a wise border collie, as he provides the morals and how to understand them. Basically, it's an animated version of The Saddle Club.

The series returned to CBS as part of Cookie Jar TV on February 5, 2011.