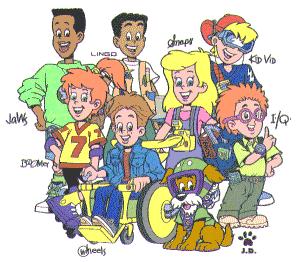 not included.
"Okay, let's see... we got the Hispanic one, the black one, the Asian one, the one in a wheelchair... oh yeah, and the white one. Time to write the scripts."
Advertisement:

A Five-Token Band consists of characters from very obviously different backgrounds and ethnic groups, but rather than being assembled disparately they all happen to live in the same area, regardless of how diverse the town should be. In school-centered shows and media, the "different backgrounds" may also include different social groups, hobbies, or cliques (ex. nerds, artists, jocks). Typically, this is designed for one of two purposes:

The first type is more likely to be benign than the second. The second may be handled poorly.

The Multinational Team will often have a reason for the cast's diversity, whereas the Five-Token Band may often be diverse for the sake of being diverse. This is not to say that a Multinational Team is immune to tokenism or stereotype — it is simply a different breed of trope.

Note that in real life, people often do have extremely diverse backgrounds. There really are Jewish Black Brits,note Sophie Okonedo for example or half-Polish half-Palestinian Polish-speaking Americans,note Abed Nadir from Community, though he is portrayed by the Indian-/Polish-American Danny Pudi. or even lesbian, Malaysian-born Chinese Australians.note Penny Wong, current leader of the Australian Senate. It is not egregious to include such characters, as that merely reflects the diversity of the real world. When the diversity is shown in a way that is absurdly ham-fisted, too stereotypical or formulaic, or ignorantly written, however, that may be a problem. Specifically, it is very noticeable when the combination conforms to a standardized formula with set roles, typecasting, and numbers, as listed below.

Despite the emphasis on racial harmony, in this trope the Caucasian, blond, All-American male is all too often the leader, or conversely, the complainer. Other characters may also end up more as stereotypes than people. However, the Five-Token Band is usually created with no malicious intentions, and indeed, many of the bands listed below have well-developed characters or are from well-written shows.

The most common layout of a Five-Token Band, especially in the nineties, seems to go as followed:

Compare the more economical Token Trio, and the villainous counterpart, Equal-Opportunity Evil. The All-Stereotype Cast is related, and the worst executions of this trope will probably cross over with it. If it's people with power, it's likely a Cosmopolitan Council. Compare/contrast Multinational Team and Party of Representatives. See also Token Minority and Token White. This can also be a side-effect of Color Blind Casting. Cast Full of Gay can cross over with this, often when the characters are not all the same kind of LGBTQ.