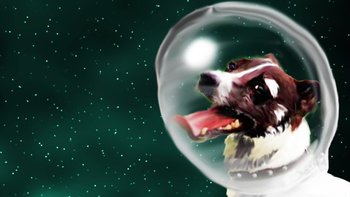 Time Spanner is a BBC Radio 4 Science Fantasy sitcom about Time Travel, written by Simon Kane. The pilot was broadcast in January 2017, followed by a special in December 2018.

Martin Gay's 40th birthday is disrupted by two very important moments: one is meeting Gabbie, the girl of his dreams who he might possibly have just said totally the wrong thing to; and the other is being forced at gunpoint through a supernatural mirror into a world of angels, robots and the most powerful tool in the universe, the Time Spanner, which gives the holder the power to span time.[1]

This radio show contains examples of the following tropes: