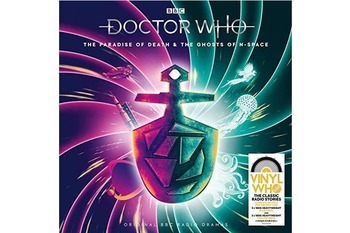 In 1993 and 1996, two BBC radio serials were produced for Doctor Who, starring the Third Doctor, The Brigadier and Sarah Jane Smith. Joining team TARDIS in both stories is a new character named Jeremy Fitzoliver, Sarah Jane's ditzy coworker. They were notable as the first "proper" Doctor Who stories produced by the BBC since the show had gone off air in December 1989.

The first serial, "The Paradise of Death", sees UNIT investigating a theme park which seems to have actual alien monsters on display. The plot eventually takes the gang to an alien world where a single source of food and energy has plunged its population into apathy. Bread and Circuses and Virtual Reality (and combinations of the two) have replaced all entertainment, and the Doctor has some very nasty suspicions as to where the fertiliser for the universal food source comes from. Team TARDIS joins up with La Résistance to liberate the planet and overthrow the Mega-Corp The episode takes place after "The Time Warrior".

The second story, "The Ghosts Of N-Space", takes the Doctor and his companions to Italy, where a mad monk has been causing trouble for centuries. The Brigadier's Italian uncle (well, cousin — well, something a few times removed) helps the gang fight demons of a scientific purgatory equivalent while the Doctor and Sarah dash through different time periods. It takes place after "Death To The Daleks".

Both stories were novelised by their author (the latter was released as part of the Missing Adventures range as Target Books was defunct by this point, and was also released over a year before the story was broadcast). A third serial was planned, but cancelled due to Jon Pertwee's death. However, a short story (recorded in 1974) with the title "Glorious Goodwood" does exist, which is ten minutes long — and was kept hidden in the BBC archives until 2005.