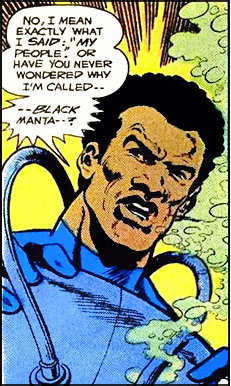 ...to be honest, we just assumed it was because of the color of your costume.note And for context, this panel is the first time DC had ever shown his face... over 10 years after his first appearance. As for why his costume looks blue, see Purple Is the New Black.
"What can I do for you, Father O'Mally'O'Connel'O'Carrol'O'Reilly'O'Brian'O'Sullivan...who is also Italian?"
— Father Alexander Anderson, Hellsing Ultimate Abridged note In the original series, said Father is simply known as "Father Renaldo".
Advertisement:

A character is revealed to be... black. Or Asian. Or Jewish. Or any ethnicity that isn't the same as that of the majority of the target audience.

The other characters are surprised or shocked. More importantly, the audience is expected to be surprised as well. Ideally, the character will need to keep covered up before the reveal or have non-obvious features. Otherwise the trope provides comedy, possibly intentional.

This trope can be played in several ways. The fact that the character is not what the audience would assume can be used for a cheap shock effect. Sometimes, the fact that the other characters are surprised is parodied. Alternatively, the audience may be called out for assuming that all characters have a certain ethnicity unless otherwise specified.

Interestingly, if the character didn't know about their own ancestry beforehand, The Reveal often will trigger (at least in more fanciful works) a major personality overhaul. The character will now be fully conscious of their "blood" and begin identifying as an ethnic minority and seeing the world in a much different light. Or they might be unimpressed and attempt to play down their pedigree and become annoyed if anyone brings it up as something supposedly important.

If the story contains An Aesop, it's usually that all races are equal.

In these melting-pot days in western countries (particularly America), it is on the way to being a Discredited Trope. However, many non-western countries remain near-ethnostates and such a reveal may still be rare and shocking. Compare Samus Is a Girl and Gender Misdirection. Contrast But Not Too Foreign where a seemingly foreign character is revealed to be at least partially a member of the target audience's nationality. Compare and contrast Half-Human Hybrids, where a "human" character is revealed to be partially an animal or a mythical creature.