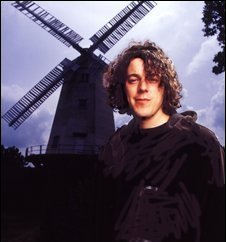 A cult British Detective Drama about the eponymous Jonathan Creek (Alan Davies), a celebrity magician's trick-designer with a keen eye for detail and lateral thinking who helps solve seemingly impossible crimes, often a Locked Room Mystery. He works together with Intrepid Reporter Maddy Magellan (Caroline Quentin) — and later, with Carla Borrego (Julia Sawalha) in the fourth series and with Joey Ross (Sheridan Smith) in the subsequent specials. After a significant hiatus and Character Development, this role was transferred to Jonathan's new wife Polly (Sarah Alexander). The show was written by David Renwick, otherwise known for One Foot in the Grave. The two shows share his trademark intricate plotting and black sense of humour.

Jonathan has a thing or two in common with Sherlock Holmes, in that he's a bit of a social dolt and obsessed with his job, and feels most comfortable just quietly working on his gadgets. However, unlike Holmes, he's neither very crass nor particularly brilliant (just regular clever and Good with Numbers). Love Interest Maddy subverts a number of tropes as well: she's not part of The Beautiful Elite, and the tension between her and Jonathan just quietly builds up without too much drama. Both are simply rather ordinary people with a keen eye for detail, caught up in extraordinary events.

The show's chief theme was the same one expressed by Sherlock Holmes in his aphorism "once you have eliminated the impossible, whatever remains, no matter how improbable, must be the truth". Jonathan would explain that most people are much more willing to consider something "impossible" or invent a supernatural explanation, than allow themselves to believe that a man would put himself to the trouble of arranging a complex set of events to make it look that way. Jonathan takes this one step further by pointing out that most people are eager to believe extraordinary phenomena simply because the solutions are mind-numbingly banal: "People beg me to explain, but it’s the last thing you want to hear. Because I’m disproving a miracle."

Jonathan's employer, Adam Klaus, became a regularly appearing character from the second series, usually in a comic-relief subplot rather than getting involved in the mystery-solving. Although a skilled magician, Adam is also a great big jerk.

The first three series aired between 1997 and 2000. A Christmas special aired in 2001, introducing TV presenter Carla Borrego as Maddy's replacement and was followed by a full fourth series in 2003-04. A few feature-length specials (featuring third female sidekick, Joey Ross) followed; one at New Year 2009, one at Easter 2010, and one at Easter 2013. Prior to the airing of the 2013 special, it was announced that a new series (consisting of three 60-minute episodes) had been commissioned for 2014, the show's first full run in a decade; this was followed by a Christmas special in 2016, considered an early 20th anniversary special. Renwick has since confirmed that he has no plans to write any further episodes, citing his growing disillusionment with the television industry.