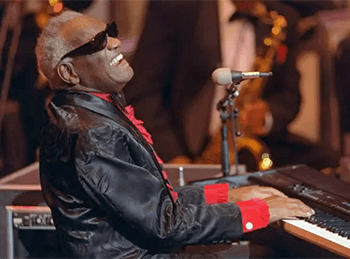 Ray Charles: one of the founding fathers of soul, and blind since the age of seven.
Music is a common career of choice for people without sight, both in Real Life and in the realms of fiction. In many cases, the musician's lack of vision will actually enhance his musical abilities. This is because the loss of sight can sharpen other senses such as hearing, perhaps qualifying this as a real-life Disability Superpower.
Advertisement:

See also Your Eyes Can Deceive You, Blind Black Guy. May be a Handicapped Badass. A Sub-Trope of Genius Cripple.

Subtrope of Ironically Disabled Artist. Compare and contrast Deaf Composer, when an artist's disability directly conflicts with their skill.