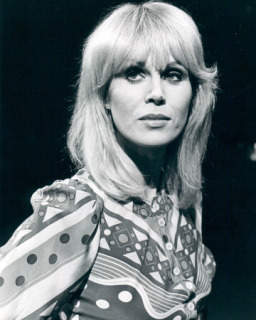 "I find it a great antidote... lipstick and mirrors and hairspray."
— Absolutely Fabulous
Advertisement:

Dame Joanna Lamond Lumley, DBE, FRGS is a British actress, voice-over artist, former-model and author, whose career has spanned over four decades. She was born on 1 May 1946 in Srinagar, India, which was then part of The British Empire.

Her acting career began in 1969 with a small role in the film Some Girls Do and as a Bond Girl in On Her Majesty's Secret Service. She became a star in the UK in the late 1970s thanks to two leading TV roles, first as Action Girl Purdey in The New Avengers, a Darker and Edgier Revival of The Avengers, and second as the questionably benevolent Humanoid Abomination Sapphire in Sapphire and Steel. Her second period of major fame came in the 1990s when she starred with Jennifer Saunders in Absolutely Fabulous. Joanna Lumley has also starred in a number of documentaries about exotic places in the world, travelling the breadth of the River Nile to ancient Egyptian tombs. She has become well known for her distinctive, breathless way of speaking and cut glass British Accent and as such voices AOL mail.