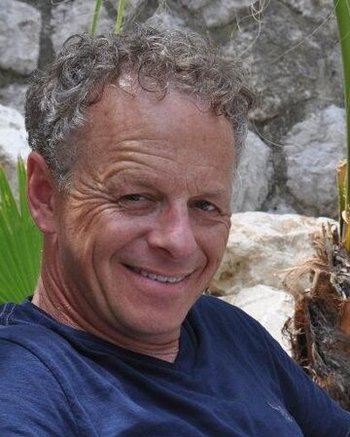 Jeff Lumby (born 1955) is a Canadian actor and voice actor.

Jeff Lumby got his start playing the characters Tex and Stampede on the 1982 children's show Size Small, which was actually created and produced by his own family. However, he is most famous for playing the immaculate and upbeat but overly passionate sewage cleaner Winston Rothschild III on Global and CBC's classic comedy series The Red Green Show. Outside of those two series, he's also known for appearing in the 2005 romantic comedy movie The Perfect Man and playing various characters on the 2006 series Uncle Joe's Cartoon Playhouse.

And while his live-action television roles are more recognizable to most, Jeff Lumby is far more prominent in the world of animation, where he has provided voices for many cartoons, as well as a few anime dubs. His most notable animated roles are probably on the Canadian version of the animation/live-action game show Skatoony, where he voices the show's money-grubbing producer Charles La Puck, and the CWi dub of the beloved Sailor Moon anime, where he provides the voice of the villainous mad scientist of the series' third story arc Professor Souichi Tomoe. Other roles of his include the father of the title character in Ricky Sprocket: Showbiz Boy, The Narrator in both Wandering Wenda and the 2015 reboot of George of the Jungle, and Jason on The Little Flying Bears. He's also appeared in more minor roles in numerous other shows.

Jeff Lumby has also worked in radio. He was host of Hamilton, Ontario's CJXY-FM rock station for eight years, as well as co-host of the morning show on Toronto's CISS-FM until 1999. In 2007, he became the lead morning host of CJDV-FM, 107.5 Dave FM, a Corus Entertainment radio station that broadcasts in Cambridge, Kitchener, and Waterloo, Ontario. In 2010, became the interim host of Toronto's sports radio station The FAN 590 after its long-running duo of Don Landry and Gord Stellick was fired, being eventually replaced with Andrew Krystal. In 2012, he joined the "New Kool Morning Crew" of Kitchener and Waterloo's 105.3 Kool FM.