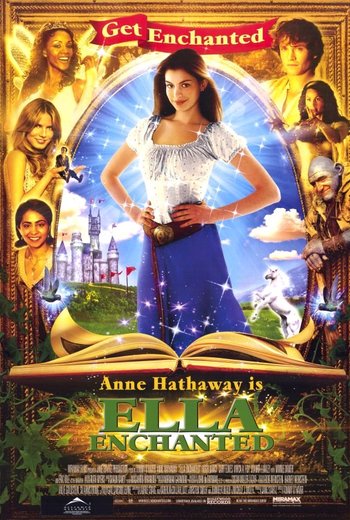 A fairy tale adventure for the hero in all of us
Advertisement:

Ella Enchanted is a 2004 film loosely based on the novel of the same name by Gail Carson Levine.

The basic premise is the same as in the novel: at birth, Ella (Anne Hathaway), the protagonist, is given the "gift" of obedience by Lucinda, a fairy. Thus is Ella Blessed with Suck. She is forced to obey every direct order given to her, no matter what.

Where the film goes from there differs significantly. The approach is more broadly comedic than the novel, with a Purely Aesthetic Era setting and the addition that Ella even obeys commands that are physically impossible: for instance, if she is ordered to "Freeze" in mid-leap, she will hang frozen in mid-air until the order is countermanded.