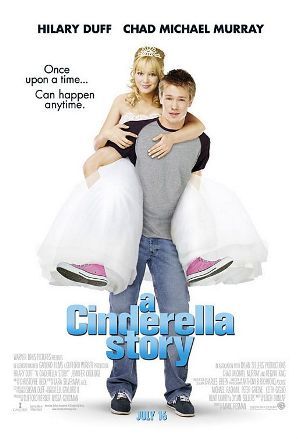 A Cinderella Story is a 2004 retelling of "Cinderella" starring Hilary Duff.

Sam Montgomery is the downtrodden "Diner Girl", a teen girl who's been forced to be a waitress at her cruel stepmother's diner ever since her father died. The only thing she has is the hope of getting out of the house and going to Princeton. Another person is planning on going to Princeton, a young man that she met at a chatroom who goes to the same school as her. She's fallen in love with him, and they plan to reveal their identities to each other at the Halloween dance. It turns out her Internet beau was the captain of the football team. How will Austin react to the girl of his dreams being a dorky waitress?