Shamed by a Mob 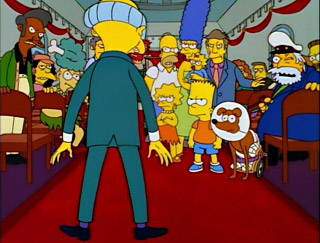 "Burns, yer scurvy schemes will earn ye a one-way passage to the boneyard."

Some kinds of villains are so clearly undeserving of respect that the only appropriate response to them, after all that they have done, is for that cold stare and unforgiving tone they are so fond of using themselves to be directed back at them instead. Especially from a large group of characters all at the same time, since the dramatic impact of combining their hatred with the prior reason for it (at least to those who are familiar with the context) can create an especially epic feel, though in a darker and angrier way.

Sometimes the cold stare of the mob can be directed at good characters, whether they messed something up or are mistakenly believed to have done something they didn't.

Often overlaps with Shut Up, Hannibal!, because it's based on a similar theme. Also closely related to Humiliation Conga. The opposite of Shaming the Mob. Compare The Freelance Shame Squad, when a mob of onlookers laughs at a character's misfortune.

After pelting Cricket with tomatoes, Chip receives backlash from all the customers, resulting in them no longer wanting to come to Wholesome Foods.

After pelting Cricket with tomatoes, Chip receives backlash from all the customers, resulting in them no longer wanting to come to Wholesome Foods.