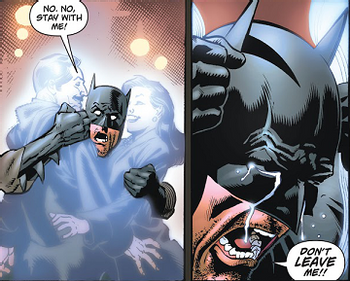 Scarlett: Rhett! Rhett, where are you going?
Rhett: I'm going to Charleston, back where I belong.
Scarlett: Please, please take me with you!
Rhett: No, I'm through with everything here. I want peace. I want to see if somewhere there isn't something left in life of charm and grace. Do you know what I'm talking about?
Scarlett: No! I only know that I love you.
Rhett: That's your misfortune. [turns to walk down the stairs]
Scarlett: Oh, Rhett! [watches Rhett walk to the door] Rhett! [runs down the stairs after him] Rhett, Rhett! Rhett, Rhett... Rhett, if you go, where shall I go? What shall I do?
Rhett: Frankly, my dear, I don't give a damn.
— Gone with the Wind
Advertisement:

A Stock Phrase said by one character desperate for another not to leave. Often said by a very lonely character, or maybe a young character with no one else to look after them. Said by a love interest frequently as well.

If the person being addressed has to go on alone regardless for whatever reason, expect a Tear Jerker moment, especially when done coldly, such as with a Little "No". This is also quite common when the person being addressed is dying, in which case this becomes How Dare You Die on Me!. Can also be a plea to prevent Dying Alone. Alternatively, to instantly turn this trope happy, just add one You Are Not Alone.

There's a third variant as well, which is less heartfelt or tragic (or more accurately, less tragic for the speaker, and even then there are exceptions) and more disturbing—this variant is generally meant to make the speaker of the phrase seem more abusive or possessive, as detailed a bit more in the Real Life section below. In these cases, expect a smidge more emphasis on the "me" part of the phrase.

Contrast with Please Dump Me. Compare Please Wake Up.