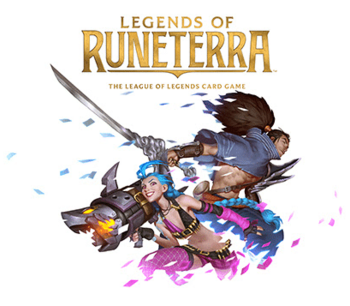 The world of Runeterra is about to get a whole lot bigger...
Advertisement:

Legends of Runeterra is a Card Battle Game developed by Riot Games as part of their phenomenally successful universe League of Legends. Set in the world of Runeterra, the game expands the scope beyond the individual champions who battle on Summoner's Rift to explore all the regions of the game's in-depth lore and the people and creatures who live in them.

Superficially similar at a glance to other games like Hearthstone, the game uses a unique shared turn system. Every turn (or "round"), both players increase their maximum mana by 1 and draw a card, and then take it in turns to deploy new units or cast spells, with the player who has priority going first and being the only player allowed to attack their opponent (unless special effects allow their opponent to rally and gain an attack opportunity of their own). This allows players to directly respond to their opponent's moves, making it more of a battle of wits. Once both players pass on taking an action, the round ends and priority swaps to the other player. Up to 3 unused mana can also be stored as "Spell mana", which can only be used to cast spells, giving players a reason to not always expend all their mana every turn for fear of losing tempo. Player decks contain 40 cards from up to two of the game's factions (including Demacia, Noxus, Ionia, Piltover & Zaun, the Freljord and the Shadows Isles at launch, later joined by Bilgewater, Targon, Shurima and the Bandlewood), giving you a lot of possible combinations. A deck can include up to 6 Champion cards from the selected regions taken from the playable cast of League, with the rest of your forces being made up of Followers. Champions can be leveled up into a more powerful form if you're able to meet their conditions.

The game was announced during the 10th anniversary celebrations for League of Legends alongside a huge number of other new projects, and finally putting an end to the running joke about "Riot Game"note for 10 years the company had been called "Riot Games" despite only ever having produced a single game (Teamfight Tactics, an autochess game built off the existing LoL assets and engine and running from the same client, wasn't really considered a separate game in its own right). After a limited closed beta period in late 2019, the release schedule was as follows:

Now has a character index in the works.

Tropes appearing in Legends of Runeterra include: