Video Game / Psychonauts in the Rhombus of Ruin 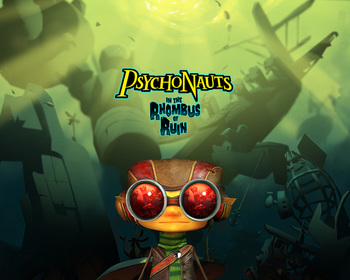 Psychonauts in the Rhombus of Ruin is a 2017 virtual reality look and click Adventure Game developed by Double Fine Productions. The game is a new part of the Psychonauts series, set in between the original 2005 game and 2021's Psychonauts 2. It was released on February 21st, 2017 on PSVR and April 15, 2018 for Steam and Oculus.

It picks up immediately after the first game left off, concerning the kidnapping of Truman Zanotto (Grand Head of the Psychonauts, and Lili's father). Raz, Lili, Sasha, Milla, and Oleander have all hitched a ride inside a jet and manage to track down Truman's location to an underground Abandoned Laboratory. Unfortunately, it lies inside the Rhombus of Ruin- a part of the ocean where many ships and planes have gone missing, due to the humongous deposit of Psilirium, which is known to interfere with technology, at the heart of the Rhombus. After Raz does some initial recon of the area with his Clairvoyance, the jet suddenly malfunctions due to the Psilirium and crashes, scattering everyone around the facility. It's up to Raz to find his friends, save them from their Psylirium poisoning, rescue Truman, and discover who is behind this dastardly plot.

The gameplay is very different from the original. Instead of a platformer, Rhombus of Ruin is a first-person puzzle look-and-click revolving around the Clairvoyance ability, which allows Raz to see through the eyes of whoever he is using the ability on. Raz must use this to solve puzzles and navigate his way through the facility.