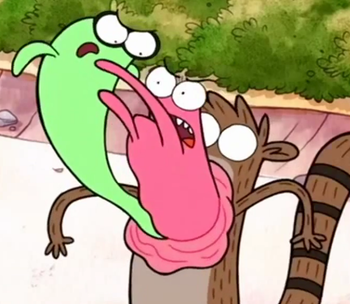 Get out of my body!
"No, I Robotboy! Protoboy take body, pretend be me!"
— Robotboy, "The Old Switcharobot"
Advertisement:

When one character forcibly and deliberately hijacks another's body, or swaps bodies with the latter against their will.

There are two main versions of this:

Except when stealing a body for its super-powers, the perpetrator seldom cares much about the victim, choosing whoever seems young, strong, attractive, and convenient. Often this is The Hero, and it sets up an episode plot. Sometimes, the perpetrator holds a competition to find the strongest in the land, with this as its hidden grand-prize. Other times, the target is the perpetrator's own offspring, who may or may not willingly volunteer; this is especially heinous if the offspring was a sympathetic character.

Grand Theft Me almost always involves stealing the victim's identity as well; with the second type, in fact, that's the whole point. A common strategy is to name the patsy as one's heir, then do the swap and kill the old body off. If done this way you often have overlap with Familial Body Snatcher and Raised as a Host. Alternatively, the old body can be committed to a mental hospital, since no one will believe the ranting of an old man who thinks he's a twenty-year-old. If the replaced person is a main character, this often sets off a Spot the Imposter plot.

Oftentimes, this is conducted in secret, and the villain reveals his true identity after a whole story spent as someone else. Especially disconcerting if his new body is the Girl of the Week. (See Showing Off the New Body.)

A more modern version is the idea of raising a clone for the purpose of brain transplant (or, more realistically, replacement parts); whatever happens to the original body after the swap is irrelevant.

A subtrope of Body Snatcher, and the dark cousin of "Freaky Friday" Flip. Sometimes, a villain attempting this type of swap can start a "Freaky Friday" Flip plot, or both could occur in parallel, as the required phlebotinum is the same. If it's not a human doing the possessing, it's Demonic Possession. If it's done by multiple beings at the same time, it's Many Spirits Inside of One. If a character is capable of doing this several times in a row, it's Body Surf. Compare Heart Drive. Contrast Fusion Dance, where it's usually done willingly and/or having them have equal control of the one body they're in. Although Fusion Dance can turn into Grand Theft Me if one of the entities emotionally manipulates the other.

Certain characters can break this, partially or completely, if the thief tries to go against an Intrinsic Vow.

It was first featured in modern fiction in the H. G. Wells story "The Story of the Late Mr. Elvesham

Has nothing to do with playing Grand Theft Auto with yourself, and the title of the trope is more of a call-out to the actual crime.