Joins to Fit In 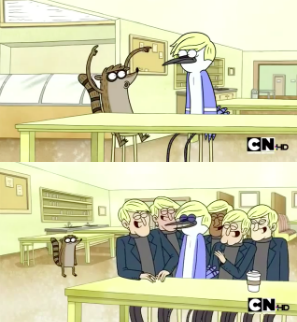 Let's say that Alice has a close-knit group of friends. Her friend group is entirely composed of men, save for Alice herself. She's female and everyone else in her group won't let her forget it. They lightheartedly tease her for it, making jokes and the like, and although they mean no harm, Alice eventually gets fed up with it. She leaves the group and eventually finds a different group of friends—a group solely composed of females.

Many times, when a certain character in a group possesses a trait that sets them apart from the group's norm, be it age, hair color, race, religion, or political view, it won't go unnoticed. It usually becomes a source of humor, of drama, or of plot/character development. When said character begins to feel oppressed, ridiculed, or just out of place for this, however, he will usually go out and find a group of similar individuals in order to counteract this feeling.

Most of the time, because Status Quo Is God, everything will go back to normal by the end of the episode, the character either realizing that he doesn't belong in the new group, the group turning out to be completely evil, or the whole subject getting dropped and never brought up again. Still, sometimes the switch can last several episodes, or rarely, become completely permanent, depending on the reason for the split and the attitude of both the original group and the new group.