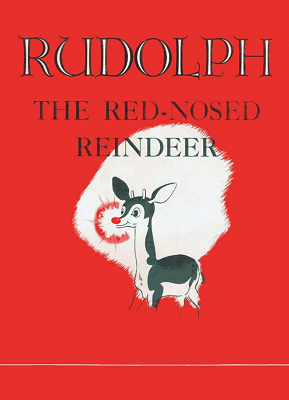 But do you recall the most famous reindeer of all?
Rudolph The Red-Nosed Reindeer (1949)
Advertisement:

Rudolph is the most famous of Santa Claus' reindeer. He's a young buck who was born with a striking, luminescent red nose.

The origin of the character dates back to The Great Depression. The Chicago retailer Montgomery Ward would give away coloring books every Christmas, but it was decided that self-publishing their own books would save money. In 1939, Robert L. May created a booklet about a reindeer. While looking out his window into the fog that Chicago is well-known for, he had the idea to write about a reindeer with a glowing red nose. Thus, the story of an ostracized reindeer who gains recognition due to his special nose was born. Robert originally thought of naming the new character "Rollo" or "Reginald", but in the end he decided on "Rudolph".

Originally, the book was declined. Red noses were too associated with drunkards to make for a charming kid's tale. It's only after the illustrator drew adorable-looking deer that the idea was warmed up to. The booklet was a swimming success and sold over 2 million copies its first year.

In 1947, the booklet began mass-production and thus the story started becoming well-known internationally. After an Animated Adaptation in 1948 and a hit Gene Autry song in 1949, Rudolph's popularity was cemented. He's only become more and more recognizable over the decades.

Since the original booklet's release, Rudolph has become the most iconic of Santa's original eight reindeer, eclipsing the ones from 'Twas the Night Before Christmas. As a result, he's been referenced in numerous media. Rudolph is no exception to The Wiki Rule and has his own Wikia

. A reading of the original story can be viewed here.

Robert L. May later wrote two follow ups called Rudolph the Red-Nosed Reindeer Shines Again note  Later shortened as Rudolph Shines Again released in 1954, and Rudolph's Second Christmas (released posthumously in the early 1990s). Rudolph Shines Again focuses on Rudolph feeling unhappy after Santa's reindeer start getting jealous of his fame and acting unfriendly towards him. As a result, his red nose temporarily stops shining. Rudolph later meets a group of rabbits who are desperately searching for their missing babies. Rudolph's Second Christmas involves Rudolph discovering Sonny and Sis didn't get any Christmas presents due to working at a failing circus that is constantly traveling to different places. Rudolph's Second Christmas (later renamed to "Rudolph to the Rescue") didn't get published until Montgomery Ward and May's daughters discovered May's manuscript 1991, and released publicly in 1992. Sixteen years after May's death.