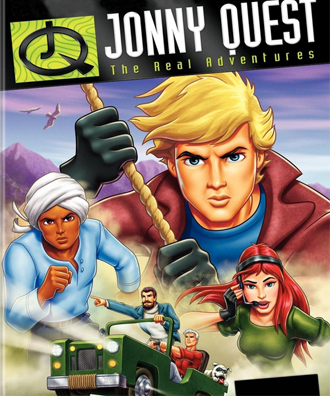 The Quest team is back! Yep, even Bandit.
Advertisement:

A Sequel Series to the wildly popular 1960s Hanna-Barbera animated show Jonny Quest, which aired simultaneously on TBS, TNT and Cartoon Network when it was introduced in 1996. It covers the same basic idea as the previous versions, that of a teenage boy named Jonny Quest, who travels the world with his family, investigating mysterious phenomena they encounter along the way (sometimes said phenomena come find them at home, of course). Adventure plots ensue.

Cartoon Network spearheaded this re-imagining with the purpose of attracting a wider audience by aging the younger characters by a couple of years, making it Darker and Edgier, adding a strong female main character in Jessie Bannon (Race's daughter who was introduced in the Made-for-TV Movie Jonny's Golden Quest, not to be confused with that other Jessie girl from the 1980s The New Adventures of Jonny Quest series of dubious canonicity), and adding a tech element in Quest World, Dr. Quest's fully immersive virtual reality system, which was animated through 3D graphics that wowed the kiddies back in 1996.

The first season of the show focused mainly on these new aspects, and the second "season" was produced by a different team (including a completely different voice cast) with the aim of resembling the classic JQ series a little more closely. note Actually, each "season" was a completely different series. After production problems cropped up with the first series, HB commissioned an entirely separate show called The New Jonny Quest. The show eventually aired as the second season of Real Adventures. They originally weren't even meant to share the same universe.

The show was generally well received by fans and critics, even gathering a decent-sized Internet fandom within a new generation of teens and young adults who have now grown fully into adulthood and have raised it almost to cult status all on its own. However, the ratings and merchandise revenue were not high enough to warrant a renewal for a third season. Many feel that it was killed before its time.

During its run, it was titled The Real Adventures of Jonny Quest, but that was switched around with the DVD release, likely for cataloguing purposes.