"I used to love the nightlife
And hang out in a bar...
I used to hit the bottle,
But then I hit a car."
—First lines of opening theme 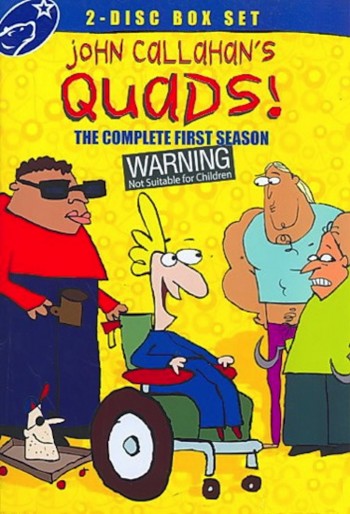 It's my life, such as it is...SUCH AS IT IS!
Advertisement:

John Callahan's Quads! is a Canadian-Australian Black Comedy from Nelvana created by American cartoonist John Callahan, who was rendered quadriplegic at the age of 21 after a car accident and based the cartoon on his experiences being around other handicapped people. Like most of Callahan's work, it is unapologetic in its warts-and-all portrayal of Disability as an Excuse for Jerkassery, as Callahan resented what he saw as the pitying, patronising attitude of the general population toward the disabled, and only assumed he had gone too far if he received complaints from disabled people rather than the physically able getting outraged on their behalf.

The central character, Reilly O'Reilly, is paralysed for life after being hit by a millionaire's car, and is able to live a life of luxury on the money from the legal settlement. His other friends include a blind man, a man with hooks in place of hands, and a head on a skateboard, and while they can be just as petty and selfish as the physically able, they are united in the face of a world that doesn't seem to know how to treat them. Like much of Callahan's work, it was praised by the disabled community for its Don't You Dare Pity Me! approach to physical handicaps.

Interesting fact: This show was the very first animated series created for television that was done entirely in Adobe Flash, beating out ¡Mucha Lucha! by one year. Prior to Quads!, Flash had only been used for internet cartoons and animations.