Western Animation / I Got A Rocket 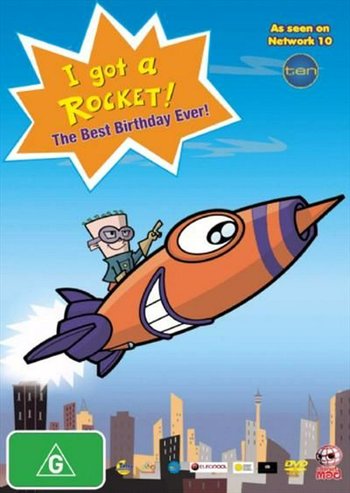 I Got A Rocket is an Emmy Award winning kids tv show airing on Kabillion. Simply put, like The Marvelous Misadventures of Flapjack was about how Spongebob Squarepants made on drugs, this series has quite a The Fairly Oddparents-esque feeling, only it's... weirder.

On his 12th birthday Preteen Vinnie Q gets the best present ever- a live, talking robot! He and his new rocket, called Rocket become best buds and embark on a number of crazy schemes along with Vinnie's two other friends Gabby and Rainbow. Together they form the July Club as all three kids were born in July. However trouble comes in the form of the three school bullies-known as The Duckies- who would do anything to get Rocket for themselves and are always happy to give Vinnie a wedgie.