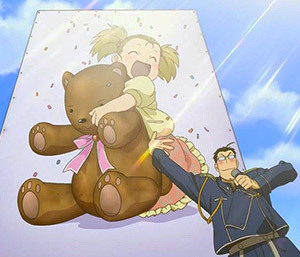 "I'mma talk 'bout my daughter, whether you like it or not!"
Advertisement:

A Doting Parent is chiefly characterized by their rock-solid belief that no-one on Earth has better, smarter, more talented, or better-looking children and will continually gush about that "fact" to everyone. They are the kind of parents who are obsessed with following their children's love lives, fixing them up with members of the opposite sex, making sure they have the best opportunities in life to their eventual and complete embarrassment, sending them presents they don't want, and drive everyone around them insane by going on at length about the wonderfulness of their children!

Unlike the Overprotective Dad or My Beloved Smother, the Doting Parent is generally not controlling or overprotective and does not view their child's potential or actual love interest as a threat. They encourage dating and find it amusing to tease their child relentlessly about any progress or lack thereof in their relationship. They even go so far as to "adopt" their children's significant others into the family well before either of the parties involved are ready to make that sort of commitment because they are so confident in their children's ability to choose a fitting partner.

Likewise, they have no problems with children leaving the nest, however, there are similarities to Overprotective Dad and My Beloved Smother in that there may be some elements of smother. To this end, the Doting Parent may come to face some of the same situations, as their children tend to choose to live on their own as early as humanly possible in an (often vain) attempt to avoid their parent's embarrassing behavior.

Typically, the Doting Parents have no interest in actually running their children's lives... after all, their superior children should be able to accomplish anything on their own. However, from time to time they may unobtrusively lend a hand and they are always open to giving advice (and are usually disappointed when their children don't come to them for help when they need it). Doting Parents also generally do not concern themselves with what their children are actually doing when out of sight, as long as when they do get to see them they are healthy and doing well.

In darker circumstances, the Royal Brat, the Spoiled Brat, and the Enfant Terrible often have Doting Parents, who are so (innocently or willfully) blind to their children's many faults they often end up enabling them. The lack of boundaries set can sometimes lead to consequences down the road when the child reaches maturity. Compare with Doting Grandparent.

Please Note: this trope solely describes parents who are proud of their children; parents who only love and cherish their children but don't necessarily express pride in them generally fall under the Good Parents category. It's also worth noting that some Doting Parents don't qualify as being Good Parents; they might indulge their children and boast about them, but don't do things like offering guidance and emotional support, or disciplining their kids when necessary.