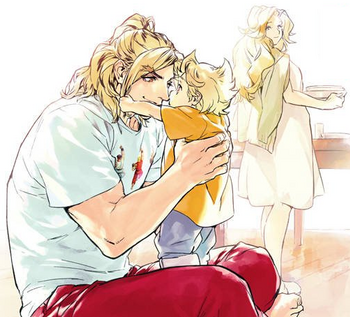 Ken Masters went home and became a family man.
"A man who doesn't spend time with his family can never be a real man."
— Don Corleone, The Godfather
Advertisement:

Part of The Parent Trope, an Always Male one.

A man who's loyal to his own family, the one he made (with a partner/spouse and children) as well the one he's part of (with parents and siblings). As the former, he could be a House Husband or well a Lazy Husband, but anyway he's loyal to his family and won't do anything to harm them, like being a cheater, an abusive or a workaholic. As the latter, he probably has the Big Brother Instinct or had a Promotion to Parent, but in both cases he wants his family united and will do anything to achieve this.

He is likely to be Happily Married. Compare House Husband, Big Brother Instinct, Promotion to Parent and both Papa Wolf and Action Dad. Contrast Married to the Job, Workaholic and When You Coming Home, Dad?. See also Family-Values Villain.