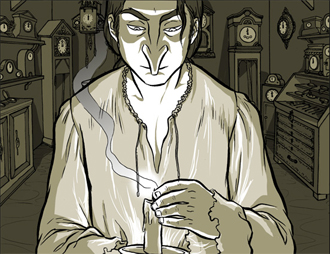 Luther Levy, and lots of clocks
Luther: I thought they'd at least give me a chance to explain myself.
Nolte: What, so you could make a convincing case for atheism in a theology program? Ach du liebe Gute! I can guarantee you that half of the men on that committee have struggled with bouts of rationalism, but NONE of them were silly enough to write a dissertation about it.
Luther: You think I'm silly?
Nolte: You were impatient. You could have muscled your way through an accepted topic, worn your sheep's clothing for ten years or so, and then scared the HELL out of them as a senior faculty member.

Family Man is the story of Luther Levy, a Pietist by upbringing, half-Jew by heritage, and possible atheist by belief, living in what is now Germany in 1768. After alienating his wealthy patroness and being expelled from university for daring to turn in a paper essentially asserting that everything most people believe about God is false, Luther has little choice but to accept an acquaintance's offer of a job as a theology lecturer in an obscure university in Moravia

. But all is not as it seems at Familienwald University, not least between the troubled rector and his enigmatic librarian daughter.

. Comes complete with its very own notes section, in which the author recounts all the cool research she did in order to make everything historically accurate. The entire comic, in terms of art and writing, is not only beautifully done, but extremely accurate to the place and period. Lovers of history and fantasy should be pleased. Also of interest may be the author's earlier, more comedic webcomic Bite Me!, which also features Luther and Lucien; Family Man is something of an Alternate Continuity prequel.

Despite of the title, it has nothing to do with this trope. Not to be confused with Family Guy.