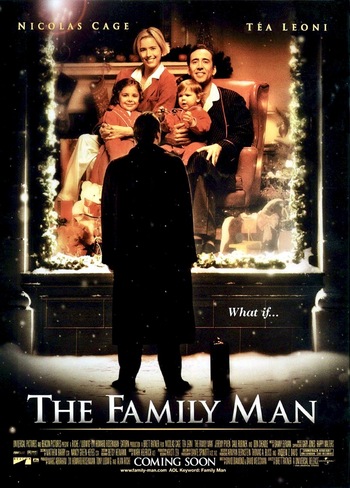 "Don't screw up the best thing in your life just because you're a little unsure about who you are."
Advertisement:

Cage plays Jack Campbell, a wealthy, high-powered Wall Street broker who, after getting—and dismissing—a phone message from his old college girlfriend Kate (Leoni) on Christmas Eve, ponders what might have been. He then has a fateful encounter with a young stranger named Cash (Cheadle), who asks Jack if there's anything missing in his life and—being answered in the negative—magically sends him to an Alternate Universe in which he and Kate got married, had kids, and settled down into a lower-middle-class existence in (horrors!) New Jersey. By the end, Jack learns that living a quiet but happy family life may be preferable to achieving success and wealth at work.

Similar to It's a Wonderful Life, both in its story and thematic elements and its holiday setting, the film received mixed critical reviews but was a box-office success.

Not to be confused with the Family Guy. Also, the Alternate Universe Jack Campbell goes straight to this trope and the film title.