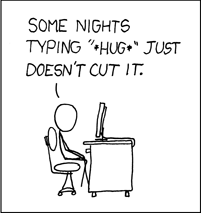 Perhaps Alice and Bob started out dating while they lived close together and one had to move away (at least far enough away where they can't see each other in person on a regular basis); perhaps they began the relationship through the mail (or, in more modern stories, over the Internet) and never met in real life at all (but may be planning to at some point).

At any rate, a story that has a long-distance relationship often deals with its pitfalls, the #1 being that Absence Makes the Heart Go Yonder. If they've promised to reunite but one party takes his / her (generally his) time, it may result in I Will Wait for You; if outside pressures force the waiting party to be with someone else, this then becomes You Have Waited Long Enough. For when someone pretends they have a long-distance relationship as a transparent cover-up for actually being single, that's Girlfriend in Canada.