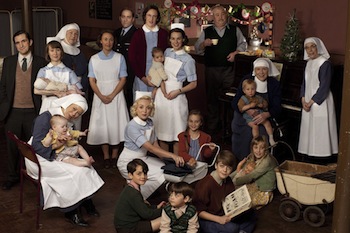 A BBC series created by Heidi Thomas and based on the memoirs of Jennifer Worth, Call the Midwife follows a group of midwives and nuns working in London's poverty-stricken East End in the late '50s and early '60s. The series received a virtual confetti shower of glowing reviews praising everything from its gritty storylines to its handling of women's issues, with the Radio Times citing it as "the torchbearer of feminism on television."

=* Missing Mom: Timothy Turner's mother passed away a few months prior to the start of series 1. The impact of this on his life and his relationship with his dad (Dr Turner, the local physician) is definitely not shied away from. Dr Turner admits how he's worried how his son will handle certain points of his life without a mother and that Timothy has made it clear that he can't stand his poor level cooking and repeated "fish and chips" dinner. Gaining a Good Stepmother in Shelagh appears to fill this void in Timothy's life and he loves her like his own mother. However, he still very much remembers his late mother and is shown to dearly miss her.